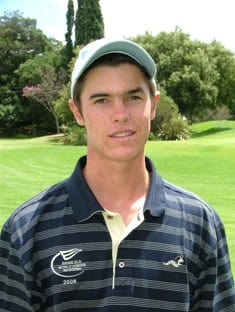 Kyle Lucas and Frenchman Johan Lopez Lazaro both shot four under par 67s to lead the morning field in the first round 36 hole Qualifying for the Glacier SA Amateur being played at Benoni Country Club.

Enjoying cool but windy morning conditions, 17 year old Kyle Lucas, who plays out of Reading Country Club in Central Gauteng, carded six birdies and one bogey for his pace setting round, not bad for someone who played the course ‘blind’.

“I last played Benoni Country Club about three years ago and I did not play a practice round for this championship,” said the delighted Glenvista High School matric student. His lack of course knowledge showed when on his first hole of the morning, the par 5 10th, he over hit his approach by some 10 metres resulting in his only bogey of the day.

He recorded six birdies, five of them on holes 1 to 9.

In contrast to Lucas, Johann Lopez Lazaro reported he was tied after his pace setting round, which included an eagle at the 1st (his 10th hole) and five birdies. He also carded two bogeys, both of them as a result of three putts. He complained that he could only get one practice round in due to commitments the French Team had with regard to the Test Match, played against South Africa, earlier in the week, and attending a Development Clinic in Lesedeng Township outside Vaalwater on Thursday this week. 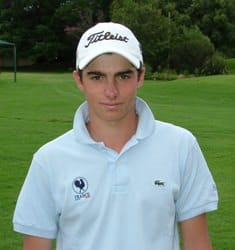 “I played very well, was hitting the ball great and putted really well,” Lopez Lazaro said, through the assistance of a translator, after returning his score card.

The Frenchman is 19 years old and plays his golf a the PCountry Club in Paris.

One shot adrift is local lad, 23 year old Johan Bekker. After his round of 68, four under par, which included five birdies, he said, “I hit the ball solidly, hitting all the greens in regulation today,” he said after his round. Bekker grew up in Benoni with the host venue being the club at which he got his first official handicap.

In the International Team Event, the South African pairing of Adrian Ford (76) and Dean O’Riley (72) did not fair as well as was hoped. O’Riley claimed that he struggled from tee to green today, bearing this in mind he was not dissatisfied with his score. Ford on the other hand reported that things did not go his way on the course. He said he putted badly evident in the fact that although he hit 14 greens in regulation he finished his round 4 over par.

67 players finished their rounds this morning, the balance of the field of a total of 139 players will conclude their first round this evening.

The second and final round of the Qualifying will be played tomorrow, after which the top 64 players will advance to the Glacier SA Amateur Championship Match Play stages.