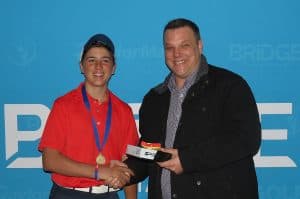 Francois Cilliers, who won the season-opening event at Royal Cape Golf Club in July, looked on course for back-to-back victories at the Old Course at Paarl Golf Club. However, the Strand golfer bogeyed the last two holes for a 71, giving Loubser and Couch the chance to pounce.

Loubser overturned a bogey at the fifth with an eagle at the par five sixth, and reeled in birdies at 10, 12 to offset further drops at eight and 11. The 16-year-old birdied 17 to move to two-under and set the clubhouse target with a round of 70.

Couch started with four straight pars, had a double bogey at the par four fifth, but birdied six and nine to turn level. The 16-year-old fired seven straight pars down the back nine and forced a play-off with a birdie-birdie finish.

The pair split the difference in pars at the first, but Loubser hit a great approach into the par-four second and boxed the birdie putt for the win.

Loubser was just six when he was introduced to golf by his father and took up the game competitively at the age of 12. The Paul Roos Gymnasium pupil, who plays off scratch, is coached by Lana Orgovanyi of Pure Motion Golf Academy.

“That feeling you get when you stripe a driver or sink a long putt is what gets you hooked,” said Loubser. “It is so great to finally win a Bridge Fund Managers Junior Series event, because I have come close so many times. I look forward to the regional finals and the chance to compete for a trip to Pinehurst next year.

“I had a few bad shots, but when that happens, I remind myself of previous occasions when I’ve managed to recover. Like in the play-off, when I pulled my drive left into the rough. I recalled times this had happened and how I turned that into a positive.”

His response was a purely struck short-iron to 10-foot before he stroked home the winning putt.

“Although I guaranteed my spot in the South Final with the win in Paarl, I am definitely going to play some more tournaments. The quality of the organisation and the courses we get to play is great and gives me a chance to play tournament golf at a high level.”

“Louis is a worthy winner and it is good to hear that his future plans include furthering his golfing and academic education at US College level,” said Stewart. “By winning in Paarl, Louis qualifies for the finals and will have an excellent chance of winning a trip to compete at Pinehurst, where he is sure to catch the eye of US colleges.”

The Bridge Fund Managers Junior Series, which is geared at golf development, launched in July last year and was incredibly well supported, with more than 1 200 juniors competing in 16 tournaments countrywide.

The events feature Under-19 and Under-13 divisions for boys and girls, is endorsed by GolfRSA and managed by Peter Little from the South African Golf Development Board.

The series culminates in a North and South Final for the individual Under-19 winners and the two winners pocket an all-expenses paid trip to compete in the prestigious Junior North and South Championship at Pinehurst.

Deon Germishuys from Western Province and KwaZulu-Natal junior Nikhil Gopal were the winners in the inaugural series and lined up in a field loaded with America’s top juniors. Reigning SA Amateur champion Germishuys finished joint fourth and Gopal tied for 18th.

In addition to the main prize, the first player to score an ace in the series bags Unit Trusts valued at R5 000 from Bridge Fund Managers, while the names of all the Under-13 Division winners are entered into lucky draws at the North and South Finals. 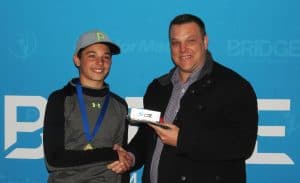 The second player to throw his name in the hat to win products from series-sponsor TaylorMade to the value of R2 500 was Pearce Lewin from Metropolitan Golf Club.

Starting at the 10th tee, the Reddam House scholar turned two over after a lone birdie and three bogeys. He made three birdies and an eagle on the homeward stretch to counter three bogeys for a 72 and a one shot victory over Caden Chuang.

The third event in the second Bridge Fund Managers Junior Series is scheduled for Royal Durban Golf Club on 9 September and the fourth at Strand Golf Club on 16 September 2018.

Written by Doug Carew from Splash PR and Lali Stander from GolfRSA. Released on behalf of GolfRSA.