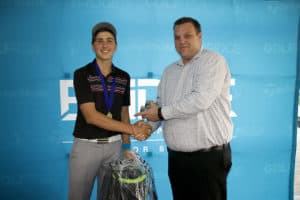 A Grade 11 pupil at The Golf School of Excellence in Tygervalley where he is coached by Paul McKenzie, Louis birdied the 15th and the 16th holes to end the day 2 under par and a single shot ahead of Luke Pienaar, with Jere Brits and Travis Procter a further shot back. Runner up Luke played excellent golf in a round which included 6 birdies.

The win sees Louis qualify for the South Final of the Bridge Junior Series which will be played at King David Mowbray Golf Club in April 2020, where he will compete against an elite field for the chance to win an all-expenses paid trip to the Junior North and South Championship at Pinehurst, USA in July 2020.

The opportunity to play at Pinehurst is a big motivator for entering the Bridge Junior Series tournaments, and Louis hopes to emulate Tyran Snyders, who in July 2019 became the first South African to win the championship at Pinehurst.

“Junior golfers in the Western Cape have competed against Tyran many times, so his win at Pinehurst is inspiring because it tells us we are capable of performing at international tournaments,” said Louis, whose other big goal for the year is to earn a spot in the junior inter-provincial team (IPT).

“I enjoy the Bridge Junior Series tournaments and will play in a few more this year even though I have already qualified for the South Finals. Winning in Strand means I can play pressure free.”

Louis said the key to his win was putting the ball in play off the tee on a day of typically blustery winds at Strand. “I didn’t have my best game today but was able to grind it out and birdies on the 15th and 16th got me back into the tournament,” said Louis, whose long-term aim is to earn a scholarship to play college golf in the USA.

“Louis is now a multiple winner in the Bridge Junior Series and has an really good chance of winning that sought after spot at Pinehurst,” says Paul Stewart, Chief Executive at Bridge Fund Managers.

“Passion, love and respect for this incredible Game of Golf starts at a young age, and through the Bridge Fund Managers Junior Series, we at TaylorMade Golf are able to play a small part in contributing towards this over the season ahead,” says TaylorMade Golf brand manager Aaron Russell.