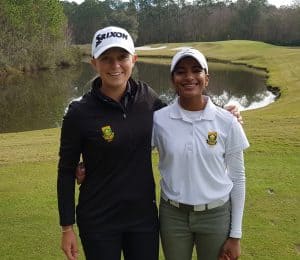 St Augustine, FLORIDA (20 January 2019) – Kaiyuree Moodley from Gauteng went around the Slammer and Squire Course in level par in Saturday’s opening round of the Annika Invitational USA, presented by Rolex, at the World Golf Village in Florida.

The 2018 Youth Olympian finished in a tie for seventh, three shots behind first round pacesetter Annabell Fuller from the United Kingdom.

GolfRSA Elite Squad team-mate Caitlyn Macnab was one-under through 15 holes, but dropped five shots over the last three holes to sign for five-over 77.

Moodley bogeyed the second hole, but bounced back with a birdie at the third and cancelled a second bogey at the par-four sixth with a brace of gains at eight and nine.

“The course was playing a bit longer in the morning, due to the cold weather, but I started nicely,” said the 17-year-old Bryanston golfer. “I turned one-under and got it to two-under with a birdie at the par-four 14th, but unfortunately I gave shots back at 15 and 18. 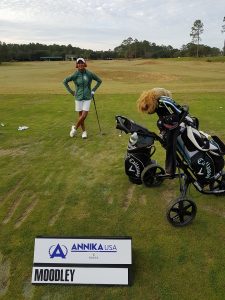 “The last couple holes are really long and tough. For example, I hit driver, 5-iron into the uphill par-four 17th and I had to take a 5-wood for my second on 18. I pulled it slightly and found the water, so I was pleased to walk away with just a bogey.

“I three-putted at the first and third holes, still adjusting to the incredible fast greens, but I made a lot of good up-and-downs to save par. The game felt really solid and I’m happy my start. Hopefully I can keep improving over the next two rounds.”

“I was extremely disappointed walking off the course, after two silly mistakes cost me four shots,” said the 17-year-old from Ekurhuleni. “I played really solid. I hit every green except for the third on the front nine and I struck the ball well, although I struggled a little bit with my draw.

“I had a three-putt drop on six, but I hit a great approach into the par-three seventh and sunk a six-footer for birdie. I parred the next six holes, and at 13, I hit my approach to five foot and boxed the birdie putt. I had quite a few chances inside 10 foot between the eighth hole and 14, but the putts either lipped out or wouldn’t drop.”

Macnab made a double bogey at the par-five 16th after a perfect drive. 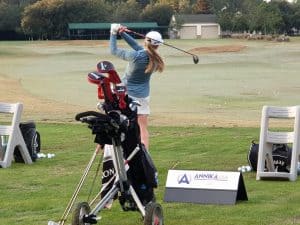 “I wanted to lay up, but I hit my second into the hazard. I played it out to the fairway, but I landed in a divot,” she said. “I played it out of the divot, caught it fat and finished short of the green. A chip and three putts later, I was so angry with myself. Such a silly mistake, because there was placing. I guess I was just too caught up in the moment.

“My three-foot par putt lipped out, but soft drops happen and it didn’t really upset me. The final hole is a dogleg right par-four with water all the way up the left. It’s one of hardest holes on the course. The wind picked up as we got to the tee box, coming off the right.

“I took out 5-iron, but I started it too far left and it went into the hazard. Then I topped my 3-wood into the water. That was a bit embarrassing. After I dropped, I hit hybrid into the green and made a two-putt for a triple. Overall, I played solid at the start and I look forward to the next two rounds, because I still took a lot of positives out of the round despite the finish.”