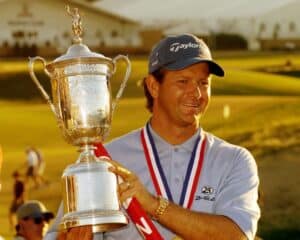 17 June 2021 – The 121st U.S. Open tees off today at on the formidable South Course at Torrey Pines in San Diego, California with eight South African hopefuls in the field.

The last man to lift the U.S. Open trophy was Goosen.

The laid-back, easy-swinging Polokwane native won the first of his two titles in 2001 with a two-stroke victory in an 18-hole Monday play-off against Mark Brooks at Southern Hills in Tulsa, Oklahoma.

The pair tied on four-under-par 276 in regulation play on the Sunday, after both had three-putted for bogey on the 18th.

Goosen made three birdies and three bogeys to finish even, while Brooks made two birdies and four bogeys, which handed the South African the win.

When Mickelson double-bogeyed the par three-17th, Goosen responded with a birdie on the 16th hole to swing the tournament his way. Both players signed off with rounds of 71. 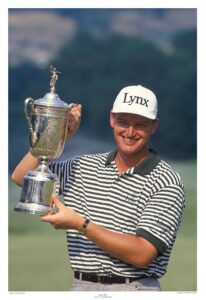 At the age of 24, Els won the first of his four Major titles at Oakmont Country Club in Pennsylvania.

A final round 73 landed him in an 18-hole play-off with Scotland’s Colin Montgomerie and American Loren Roberts on five-under-par 279. Montgomerie was eliminated after the first 18 holes, and Els beat Roberts on the second hole of a sudden-death playoff.

In 1997, Els was back in the winner’s circle at the Congressional Country Club in Maryland. This time, he won on four-under 276, one stroke better than Montgomerie.

Player had been planning to compete in a PGA Tour event the week before the Major. His biggest rival at the time, Jack Nicklaus, convinced him to join him at Bellerive Country Club, where the pair practiced all week

Ironically, Player went on to beat Kel Nagle of Australia in an 18-hole playoff after both men tied on two-over-par 282 in regulation play, while Nicklaus missed the cut. 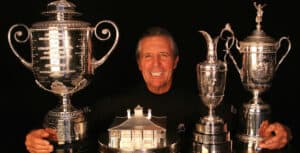 Player was the first foreign born winner of the US Open since 1927 and the win completed his career Grand Slam at the age of 29.

It was also his fourth of his nine Major titles.

The 1965 tournament was the first U.S. Open to be broadcast on television in colour, and also marked the first time it was played over four days. Previously, the third and fourth rounds were both played on the Saturday.