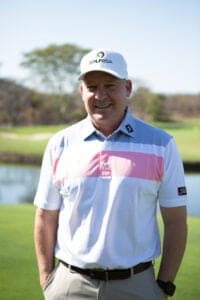 First and foremost, I’d like to wish you and your families a blessed and peaceful Festive Season.

Covid-19 has made this a difficult year for many, and I’d like to offer my sincere condolences to anyone who has lost friends or family to the virus.

With another wave upon us, I urge everyone to take every precaution to prevent transmission of Covid-19. I’m sure that, like me, you long for a world where Covid-19 is a thing of the past and we can get on with our lives in a normal manner.

Despite the challenges of the pandemic, GolfRSA has had a successful year, with only minimal disruption to our schedule of events. Thanks to Wimpie du Plessis and her team from GolfRSA, we were able to set up strict risk mitigation protocols around all our GolfRSA tournaments that allowed us to continue to run events.

It was a great to be able to host our Inter-Provincial Tournaments again, and I must congratulate Western Province on completing an unprecedented clean sweep of all the titles this year, across men’s and women’s events – a truly remarkable and historic achievement.

Our National Squad has once again delivered brilliant results all year, chalking up many wins in both amateur and professional events.

Yurav Premlall won the inaugural Nedbank Junior Challenge at Sun City in May, and in December, he conquered the Gary Player Country Club once again to lift the Freddie Tait Cup as the leading amateur in the South African Open.

Christo Lamprecht, Caitlyn, Kieron van Wyk and Kaylah Williams did the country proud with an eighth-place finish in the prestigious Spirit International in Texas, featuring 80 of the world’s leading amateurs. Christo and Kieron place fifth overall in the Men’s Team Competition, and Christo also took fourth in the Individual Men’s Competition.

It fills me with a great sense of pride when I watch our former Squad players doing so well in the professional ranks.

Garrick Higgo won twice on the DP World Tour, and celebrated a breakthrough victory on the PGA Tour with his victory in the Palmetto Championship, while Wilco Nienaber enjoyed his first Challenge Tour / Sunshine Tour success in the Dimension Data Pro-Am.

This year we saw Jovan Rebula, Ryan van Velzen and Martin Vorster join the pro ranks and we wish them all the best on their professional journeys.

Many others have opted to attend college in the United States, and we continue to follow their progress with great interest as they represent their country with pride.

Other highlights of 2021 include Vicki Traut reeling in her third successive SA Women’s Mid-Amateur title at Highland Gate Golf & Trout Estate and Ryan Dreyer finally landing the title that eluded him for six years when he won SA Mid-Amateur title at Devonvale Golf & Wine Estate. Lyall McNeil racked up four victories in six starts, including the coveted 2021 SA Senior Stroke Play Championship, to cap an impressive rookie season as the No 1-ranked Senior in South Africa.

We also launched a very successful Coastal Inland Challenge for our top Seniors and Mid-Amateurs. The Coastal Team narrowly won the Ryder Cup-style event at St Francis Links by two points after a strong comeback saw the Inland Team win seven of the eight singles matches on the final day. 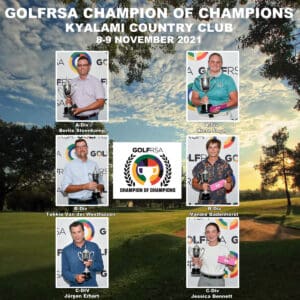 Congratulations to all the 2021 Champion of Champions winners!

And we were delighted to bring back the GolfRSA Champion of Champions tournament at Glendower, where we crowned six ultimate club champions in the Men’s and Women’s A, B & C Divisions.

I’d like to take this opportunity to thank all who have played their part in the golf industry this year, particularly the clubs and the golf unions who we work closely with to ensure the growth of the game.

The sport has seen a surge in participation, particularly in younger players, and we have a responsibility to ensure it remains an attractive and accessible game for all to play.

I’d also like to thanks our sponsors for their loyal support this year. We are proud to work alongside the likes of Nomads, Titleist and Tsogo Sun, as well as our colleagues in the golf industry from the Sunshine Tour, PGA of SA and CMASA.

The Department of Sport, Arts and Culture has also played a major role in us being able to keep the game going during Lockdown and ensuring that the most vulnerable in the industry – the caddies and casual workers – have been looked after and compensated for work they have missed.

Finally, to the GolfRSA staff, thank you for going above and beyond this year and meeting all challenges head on. It is a pleasure working with such a strong group of dedicated professionals and volunteers, and I looking forward to making even more progress in 2022.