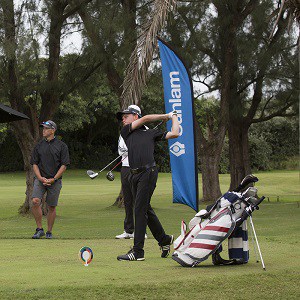 In Wednesday morning’s second round, Schaper sent Langley packing with a 4 & 3 result.

Then, in an incredible contest with Mitchell in the afternoon’s third round, the 16-year-old from Ebotse fought back from 4-down with birdies at 14 and 15 to square the match. The pair halved the first two extra holes, and Schaper won with a birdie at the 21st hole.

“David and Malcolm were two of the big names in this year’s championship and I’m humbled to have beaten them,” said the Ekurhuleni junior. “I played well against David, but I didn’t make a good start against Malcolm and he piled on the pressure. It was definitely the toughest match of my career and the hardest I’ve ever fought to win, so anything after this is a bonus.”

His quarter-final match on Thursday will be against Scotsman John Paterson, who downed Herman du Plessis 2 & 1 in the second round and beat South Africa’s number two ranked Matt Saulez 3 & 2 at his home course.

Local fans still have three players to cheer on, though, as Byron Coetzee from Cotswold Downs Lc, Greg McKay from Mount Edgecombe, and Durban Country Club golfer Chris Woollam all made the top eight.

Woollam beat 14-year-old Casey Jarvis from Ekurhuleni 4 & 3 in round two and mowed down Jordan Prytz from Benoni Country Club 8 & 7 to reach the quarter-finals.

“I learned a lot from last year, and I didn’t put any pressure on myself coming into the championship this year,” said Woollam, who was knocked out in the first round after winning the Stroke Play qualifier at Humewood last year.

“I played the course exactly as I would on any other day. I haven’t none anything different. I’m striking it well and the putter worked hard for me. I’m really pleased to have gotten this far and I relish the chance to go all the way to the finish line this year.”

Woollam will take on Gauteng North’s Keegan Mclachlan, who dispatched Aneurin Gounden 6 & 5 in the morning and knocked out Theunie Bezuidenhout 2-up in the afternoon.

The third match will be a gung-ho contest between Coetzee and Deon Germishuys.

The Scots won four times between between 2011 and 2017 and they have doubled their chances in this year’s edition with Paterson and Euan Walker.

Walker downed Jeremy Freiburghaus from Switzerland 5 & 4 and beat Christo Lamprecht 1-up. The Kilmarock Barassie golfer squared the match with a birdie at 15 and tidied up a 1-up victory with a birdie at the final hole after the defending champion lost his tee-shot left.

“It wasn’t the way I wanted to win exactly, but that’s match play for you,” said Walker.

“It was a brilliant contest and Christo was a tough opponent. It’s my first time competing in the Sanlam SA Amateur and I’m really pleased that I’ve gone so far. The course is a fantastic test and I look forward to the next challenge.”

Walker will line up against McKay, who beat Luca Filippi from Western Province 2 & 1 and advanced to the quarter-finals with a 7 & 6 victory over Christiaan Burke from North West.