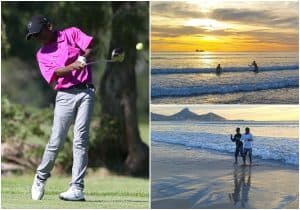 The First Swing Programme (FSP) introduces golf to disabled children at beginner’s level and nurture the most promising players to competitive level. On day one of the championship, 12-year-old Kwazi Mahlangu from Boksburg on the East Rand was a fine example of the success this programme is enjoying.

The deaf teenager had never hit a golf ball until he was introduced to the development programme at the St Vincent School for the Deaf in Rosebank, Johannesburg in February this year.

“I immediately recognised his raw talent, and an ability to work hard and learn,” says FSP head coach Andrew Corthing, who currently oversees 1 000 children from 42 schools in the programme countrywide.

“We anticipated that this group of kids in our Go for Gold initiative would qualify for the Canon SA Disabled Golf Open in 2018, but Kwazi was one of three beginners who advanced very quickly. Within three months they gained a handicap and a spot in this year’s championship.

“Kwazi, 12-year-old Mpho Thatiha and 14-year-old Wilfred de Bruin flew down with some of our other FSP learners from Gauteng last week. They have had the most amazing time, spending time with top disabled golfers like Chad Pfeifer from the USA, Josh Williams from Canada and Juan Postigo from Spain.

“At this young age we are only letting them play nine holes a round, but Kwazi absolutely astounded us. In only his seventh game of golf, he scored 20 points of his 36 handicap, so he’s already playing better than his handicap.

“He’s got such a good attitude. Every second weekend I take these three players and some of the other FSP kids to Zwartkop, where we work on golf from 10am to 6pm. It’s so rewarding for me to see Kwazi being so enthusiastic and making such good progress.”

Corthing is also using the week in Cape Town to introduce the 14 FSP players to new experiences and a trip to Bloubergstrand on Monday afternoon proved a huge hit with the kids.

“It was absolutely humbling to see the reaction of kids who had never seen the ocean,” he said. “It was like all their Christmases’ and birthday’s rolled into one. The water was freezing, but it didn’t stop Kwazi and Wilfred splashing around as if was high summer.”

Some of the older FSP players also impressed on day one of the championship.

Lavender Hill’s Charles Williams made a great start to his title defence in the SA Deaf Championship. The 23-year-old, a first year level one FSP coach, opened with an 81 to lead the division over fellow FSP learner Darren Hanekom from Fisantekraal, who shot the next best score of 84.

Not only is Corthing helping Williams and Hanekom to become better players, but he is also grooming the duo into becoming top coaches of both disabled and able-bodied golfers.