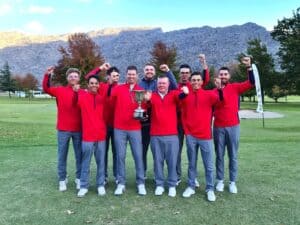 16 May 2022 – Central Gauteng was in fiery form as they marched to an undefeated victory in the 2022 Challenge Inter-Provincial against Gauteng North, Western Province and Ekurhuleni at Ceres Golf Club this May.

The Lions announced their intent with a decisive 7.5 – 4.5 victory over Gauteng North in their opening gambit.

Western Province proved tough to beat in the second round as the sides fought for every point. With the teams deadlocked at 5-all, Rees Emanuel boxed a sublime birdie putt on the 17th to keep Central’s winning run going with a 6.5 – 5.5 win.

Ekurhuleni offered little resistance as Central Gauteng slickly bulldozed their way to 9.5 – 2.5 triumph to finish the tournament as the only unbeaten team.

“It was an unbelievable experience for us, not only winning the Challenge IPT, but also playing this hidden nine-hole gem in Boland,” said Central Gauteng captain Travis Fraser. 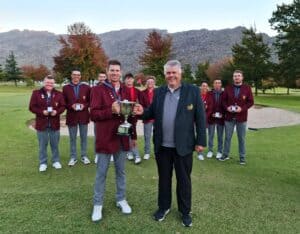 “The course was fantastic, and our gratitude goes out to the green staff who presented us with an absolutely pristine layout. From a players’ perspective, the course is really well designed with the two nines that play completely differently, especially when the wind is up. The set-up by Eden Thompson from GolfRSA was challenging and tested every aspect of the game. This course was one of the best kept secrets in Boland, but we hope we did our part to put it on the map and it draws more out-of-town visitors. It really rates well up there with some of the best courses in the Western Province.

“It was an absolutely privilege to lead this team, and Clive and I were really impressed with the youngsters. On several occasions they punched well above their weight and produced critical points for us. We enjoyed the competitive banter out on the course, and the camaraderie and sportsmanship between the four teams was fantastic. Well done to all the competitors for an incredibly special week.”

Central Gauteng fielded two mid-amateurs, Travis Fraser and Clive Palm, as well as Kayle Wykes and Caden Sanders, who competed in the 2021 SA U-19 IPT, while four players made their inter-provincial debut for the union.

“We selected Travis and Clive to bring some maturity and experience to side and they acquitted themselves tremendously as mentors to the youngsters,” said Central Gauteng manager Mike Faasen. 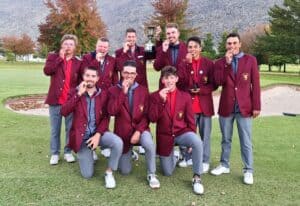 “Johan Bredenkamp was also selected for the 2021 SA U-19 IPT and did all the team prep but unfortunately, he contracted COVID two days before we departed and was forced to withdraw. The Challenge IPT presented a great opportunity to give Johan, Rees (Emanuel), John-Louis (Liebenberg) and Jules (Helary) the opportunity to build experience with an eye on the SA IPT, SA Mid-Amateur IPT and SA U-19 IPT scheduled for later this year.

“We really wanted to finish the week unbeaten, and we were thrilled to pull it through. The score line might suggest otherwise, but the majority of the games against Ekurhuleni were tight, with three of them going the distance. The team played really well as a unit, and it was great to see every player get a chance to contribute to the overall victory.

“Our thanks to Ceres Golf Club for hosting us, and to the club house staff who went above and beyond to ensure that all our needs were met. Congratulations also to GolfRSA for hosting a superb event. It’s great to have the Challenge IPT back on the annual calendar, and we applaud their initiative to play the tournament on nine-hole courses around the country, so we can shine a light on the hidden gems.”