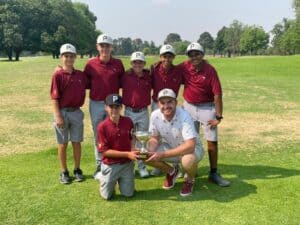 Although the final round was a bit of a battle, Chad Stanton, Syan Ramchander, Morne Steyn, Schalk van Ettinger, Andrew Erasmus and Matthew Tresling had laid the foundation for their superb triumph with an excellent opening round of 375 (+15).

An even better 373 (+13) left them with a commanding lead and they started the final round 31 strokes clear of Western Province.

Spearheaded by Eagle Canyon’s Stanton, the Lions closed with a final round of 19-over 379 to secure their first title since 2017.

“It was a great performance from the entire team,” said proud team manager Mike Faasen.

“They are a very talented group of juniors, and I am very proud of the fact that they led from start to finish. We always stress the importance of enjoying a tournament like this. I believe that if kids this age take things too seriously, they tend to lose focus, so my message from the get-go was for them to go out there and do their best, but to have fun and to enjoy it.

“I think this paid off. They are such a great bunch of boys, and they represented Central Gauteng with such pride, both on and off the course.” 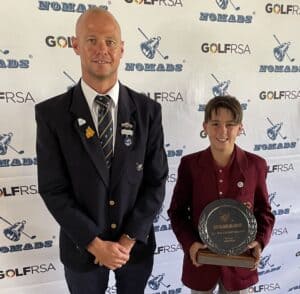 Stephen Malherbe from Nomads with Chad Stanton, the winner of the individual title in the 2022 Nomads SA U-13 Teams Championship at Maccauvlei Golf Club

Faasen and his young charges were especially proud of Stanton, who came up trumps in a gruelling two-hole play-off with Lubanzi Tselane from North West to clinch the Individual title.

“Chad was such a champion,’ Faasen said. “The two boys matched each other shot for shot for two holes, and for him to sink a 30-footer under that kind of pressure in front of 200 people to win was something special.

“It was quite an emotional moment for the entire team and not only do I think it will stay with Chad for a long time, but it really inspired his team-mates, too.”

North West leapfrogged Western Province to take the runner-up spot, courtesy of a closing 374, while the SA Kids team finished fourth and Gauteng North rounded out the top five.

Pecanwood’s Jordan Botha finished alone in third, just one stroke back in the 54-hole, while Shaun Viljoen of St Francs Links was fourth and fifth place was shared by East London’s Arron Louw and Ruimsig’s Van Ettinger.