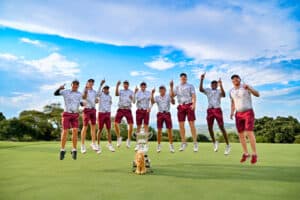 A jubilant Central Gauteng celebrate a hard-fought for A-Section victory in the South African Under-19 Inter-Provincial at Mbombela Golf Club; credit GolfRSA.

18 December 2022 – Led by talisman Jaden Deltel, who scored a perfect 12 points for his province, Central Gauteng clinched their first South African Under-19 Inter-Provincial title since 2016 with a narrow win at Mbombela Golf Club.

Central got off to a wobbly start when they went down to North West (6.5 – 5.5) on the opening day, but bounced back with a comprehensive 9.5 – 2.5 win over Southern Cape on day two.

A thumping 11 – 0 win over Boland and a narrow victory over neighbours Gauteng North (6.5 – 5.5) saw them back on track, particularly after North West dropped points against defending champions Western Province.

After a rest day on day four, Central came up against a determined Western Province team, knowing that only a win would secure them the title.

The champions-in-waiting came out of the blocks hard and fast. Amilkar Bhana and Grant Labuschagne got the first point on the board with a 5 & 4 win over James Boustead and Jack Brugman. Vuyisani Makama and Hannes Strooh then held on for a 1-up win over Mitch Phigeland and Craig Jacobs before captain Pascal Gunther and Stefan Jacobs edged Jack Buchanan and Andries van der Vyfer 2 & 1.

Bankers Filip Sakota and Deltel made it a clean sweep with a 4 & 3 win over Pearce Nash Lewin and Jungwi Lee and the Lions took a healthy lead into the singles.

But a resolute Western Province turned up for the afternoon session.

They rallied hard and pretty quickly backed Central Gauteng into a corner. With the score line at 6 – 5, Central’s hope was pinned on GolfRSA National Squad member Makama in the final match.

Makama had birdied the 16th to go 1-up, but opposite number Lee responded with a birdie on the 17th to square the match. Makama’s approach on the par-four 18th overshot the green, while Lee parked his approach almost pin high on the right of the flag.

The tension around the green at the closing hole was intense. If Province won the hole to halve the match, North West would be the victors.

Makama’s chip ran all the way to the front, but the South African Golf Development Board player lagged it to give, putting all the pressure on Lee, who had two putts to win the game and halve the match.

The Province No 1 rolled his first putt to two feet, but alas, his winning putt hit the side of the cup and spun out.

Makama’s crucial half gave the Lions the 6.5 – 5.5 win and that was enough to edge North West in a games-count after both teams finished the week on 10 points. 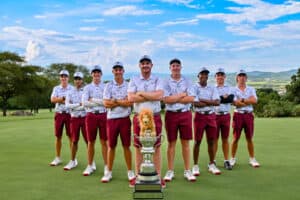 A jubilant Central Gauteng celebrate a hard-fought for A-Section victory in the South African Under-19 Inter-Provincial at Mbombela Golf Club; credit GolfRSA.

“I feel like I’ve aged 10 years in the last two hours,” laughed Central Gauteng manager Mike Faasen. “With half an hour it go, it looked like we were going to lose the match, but they really dug deep and managed to get the job done.

“I am so incredibly proud of this team. We were gutted when we lost to Western Province last year, but they came here with a winning mindset and played for every point. We’re absolutely delighted to lift the trophy again.”

Deltel was a force to be reckoned with and won all 12 games in which he played to top the Most Valuable Players’ list.