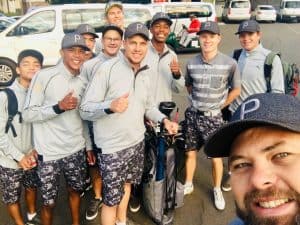 PHOTO – Central Gauteng moved to second in the log standings on day three of the SA Under-19 Inter-Provincial at Benoni Country Club; credit GolfRSA.

BENONI, 19 December 2018 – Defending champions Ekurhuleni, Central Gauteng and North West enjoyed a profitable moving day in the A-Section, while Boland tightened their grip in the fight for promotion in the South African Under-19 Inter-Provincial at Benoni Country Club.

Defending champions Ekurhuleni can afford to kick back during their fourth round bye after scoring a fifth straight victory in this year’s premier teams tournament on Wednesday.

The host union scored a clean sweep in the Foursomes against Southern Cape and although the Garden Route side’s top order rallied to win the last three games, it was too little, too late.

New caps Benji Stein and Saul Moss – playing at eight and seven – struck early blows for the side to put the team seven points ahead and Warwick Purchase, Jordan Burnand and Ryan van Velzen in the middle order did the rest to guarantee a 9 – 3 result.

Unbeaten Ekurhuleni tops the A-Section log on 10 points and is three points clear of Central Gauteng, who tied 6-all with North West, but defeated Western Province.

New cap Sam McKenzie mowed down Francois Cilliers from North West 6 & 4 and Shaun Jones won his game to move Central Gauteng 4.5 – 1.5 ahead in the match against Western Province.

Ayden Senger and Tristan Galant rallied to close the gap, but Kian Rose knocked out Freddie Spencer to get another valuable point for the Lions.

Ryan van Klis, playing at number eight, squared his game against Hilmi Mallick and halves from Marcus Taylor and Angus Klintworth – playing at two and one – secured a 7 – 5 win.

Jones, McKenzie and Klintworth also racked up points for the Lions against North West.

Nash de Klerk, though, had the upper-hand in the match against Rose, who rallied with a trio of birdies over the closing holes to square his game and draw the match.

North West mowed down Western Province 9 – 3 and moved to fourth in the standings.

While Ekurhuleni and Central Gauteng enjoy their rest day, last year’s B-Section winners will try to hunt down another victory or two when the side battles Southern Cape and KwaZulu-Natal on Thursday. Gauteng North and Western Province face each other in the final match.

Boland exorcised a first round loss against Free State with victories over Eastern Province, Northern Cape and Limpopo, however the B-Section log leaders had a tougher time getting past a fearless Mpumalanga side on moving day.

Boland trailed Mpumalanga 1 – 3 after the Foursomes, but Aidon Willemse’s 7 & 6 win in the Singles spurred a winning run.

Daniel Cronje, Carlos Losper and Angelo Keffers – playing at one, two and three – scored three points and new cap Jurie Mostert beat Francois Storm 1-up to take the team tally to six points. Hezron Frieslaar, another debutant, birdied the 17th hole to square his game against Darren Neyt and halved the game for the crucial half point that guaranteed a 6.5 – 5.5 win for the side.

Boland leads the promotion battle on eight points, but Border finished on six points after defeating Eastern Province 7 – 5 and drawing 6-all against Northern Cape.

With Boland and Border both resting on Thursday and then facing each other in the Friday’s final round, Eastern Province must score big against Limpopo in round four to stay alive in the promotion battle.