18 December 2020 – Not many people would undertake an 80-hour roundtrip journey to compete in a golf tournament, but that is exactly what 2020 South African Blind Open Championship winner Luke Lin did this December.

“I told my dad I wanted to compete in the SA Blind Open for birthday. He thought I was mad to want to fly halfway around the world for a golf tournament, but every minute we spent in the air was worth it,” beamed the Californian.

“I had heard only good things about this country and the tournament and I really wanted to experience it for myself. My dad was worried about our safety given the Covid-19 pandemic, but when he saw how safe golf was here and that the SABGA would look after us every step of the way, he gave in and bought us the tickets.

“My brother travelled with me as my guide and we were so excited. It was my very first time playing in a ‘professional’ blind golf tournament and things couldn’t have turned out better.

“The whole experience was just amazing. Every step of the way – from the airport to the club to the hotel – the people of South Africa were so friendly and helpful. Ernst Conradie from SABGA was an amazing chaperone and the tournament itself was really fantastic. It was a fierce competition and I never, in a million years, expected to win. It was the best birthday present ever.”

Lin and his brother Paul learned golf from a young age. The brothers loved the game and were very competitive. However, a few years ago, the Lin family made a painful discovery.

“My brother and I were playing a golf course in Hawaii and I began to realise that I couldn’t follow my ball. At first, we thought it was because I had shot up and gotten so much stronger and that I just couldn’t see the ball because I was hitting it so much further. But then reality set in. I was losing my sight.

“It took a while before the diagnoses was confirmed that I was definitely going blind and it was a huge adjustment. Then my brother said there is no reason I have to give up golf. He scoured the internet and watched videos on YouTube to learn how to guide me so we could still play together. Slowly we started playing again and it was so special to have him there with me at Glendower to share in the victory.”

Blind Golf is played strictly to the Rules of Golf produced by the Royal and Ancient Golf Club of St Andrews (R&A) and United States Golf Association (USGA), with the addition of “A Modification of the Rules of Golf for Golfers with Disabilities”.

This allows blind golfers to ground their club in a hazard and their coach/guide to stand on the line of the shot, without penalty, while the shot is played. Each player has a sighted coach/guide who describes the hole, helps with club selection and then ensures that the club head is directly behind the ball. From then on it’s down to the blind golfers’ swing. 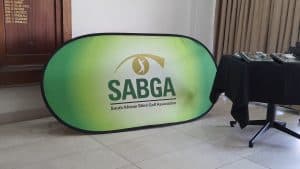 Blind golfers are divided into three divisions – B1, B2 and B3 – and the category is determined by the golfers’ level of sight, with B1 totally blind, B2 sight up to 100 metres and B3 up to 10 metres.

“I can’t see much on a golf course, but I can ‘feel’ my way around the fairways and greens,” Lin said.

“My brother does the rest, setting me up on my shots and guiding me on the lines and distance on the greens. He is also great at painting a picture for me of the courses we play and he painted the most beautiful picture of Glendower, with lots of trees and water features. And rabbits, which neither of us has experienced before.

“From a golfing perspective, the course itself was very challenging and the greens were especially tough for us.  The grass is very different to what we are used to back home, and I really had to feel my way around them with my feet.”

“My brother and I didn’t think we were doing well at all, to be honest. We were shocked when I won the B3 Division. I am really proud to go home and show my dad that it was worth making the trip. Paul and I already decided that we want to come back next year to defend. The 2021 SA Blind Open will be played in Cape Town and we are excited to explore a different part of South Africa.”

Multiple champion Garrett Slattery from Stellenbosch Golf Club won the B2 Division with rounds of 94 and 98, while Charlene Pienaar from Benoni Country Club took the Ladies Division honour with rounds of 104 and 113. There were no entries in the B1 Division.

Conradie said the success of this year’s event bodes well for the 2021 SA Blind Open and ISPS Handa World Blind Golf Championship, which will be played concurrently at Milnerton Golf Club in October.

“We celebrated the success of our individual winners, but blind golf was the real winner. Despite all the hardships our country and golf endured during this year due to the nationwide lockdown, we were able to host our annual showpiece, thanks to the continued support of all our partners and sponsors.

“Our thanks goes out to the International Blind Golf Association for underwriting the event and for endorsing the SAGBA to host the pinnacle event in blind golf internationally, the ISPS Handa World Blind Golf Championship, in South Africa next year.

“And finally, a big thank you to Sandy Burnard and the team at Glendower Golf Club for their efforts and hats off to Mike Burnard, who presented us with a pristine golf course for our annual showpiece.

“We look forward to welcoming all our international friends at Milnerton Golf Club next October and to showcase the skills of all these talented golfers to the world.”