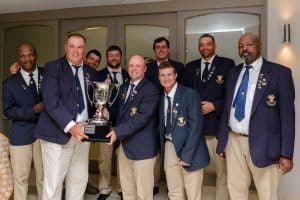 There is something about competing at the coast that bring out the best in the men from Limpopo. Exactly eight years after they won the B-Division at Mossel Bay Golf Club, the team rose to the occasion again and celebrated promotion with an unbeaten run in the 2017 SA Country Districts on the magnificent South Coast of KwaZulu-Natal.

The inter-provincial championship could not start as scheduled on Monday, 15 May. Torrential rain in the Ray Nkonyeni Municipality region rendered the pristine layout unplayable and the 10 teams had to wait until Wednesday, 17 May to start this year’s title fight.

“The practice round had to be cancelled and play was cancelled for Monday and Tuesday, but the format change worked in our favour,” said Limpopo president and team manager, Jan Nel.

“The organisers decided to halve the Fourballs for the first four rounds and play Singles only. This meant we had a bye in the first round, so the guys were rested and primed for our first fight in the afternoon.

“We scored a comprehensive 8 – 4 victory over Border and that win set the tone for the week. On Thursday, Northern Cape gave us a lot of trouble in the morning, but we managed to win 6.5 – 5.5 and we had a solid 7.5 – 4.5 result against Eastern Province in the afternoon. We went into the final round at the top of the log knowing our last match against Southern Cape would be a dog fight.”

Limpopo made a great start in the Foursomes to carry a 3 – 1 lead into the Singles and Jay van der Walt put the side 4 – 1 ahead when he knocked out Johan Greeff 4 & 3.

However, James Faber downed Franco Putter 3 & 2 and Marius de Lange beat Antony Hawken 1-up to reduce the gap and 2 & 1 results from Heinrich Frylinck and Carlo Heunis put Limpopo on the back foot.

“The news filtered down that we were 4 – 5 down and the rest of the players knew they needed to step it up,” said Nel.

Malebana Pataki – at 52, the oldest member of the Limpopo side and playing at number one – used all his experience to turn 3-up on Lucas Steyn. Pataki protected his advantage with seven straight pars to triumph 3 & 2 and square the match.

“Morne Myburgh defeated Meyer Potgieter to put us 6 – 5 ahead and it was down to Pieter Peens to secure the win for us,” said Nel. “Pieter was three down with three to play, but he put a lot of pressure on Marlo (Pienaar) and won the last three holes with pars to halve the game.

“Winning 6.5 – 5.5 meant we completed the week with a clean sweep and I think that speaks volumes about the commitment and determination of this team. Whenever one player got into trouble, there were at least two others that stepped it up.

“I managed the team that won in Mossel Bay in 2009 and watched them relegated a year later. That is a hard thing to recover from, but we began rebuilding and thanks to our former president Niko Koster, we secured a fantastic sponsorship from Ford BB Auto two years ago.

“That sponsorship made a world of difference to how we prepared for this championship. We were at the bottom of the log for seven years, but we showed a lot of improvement last year and I knew this team had what it takes to gain promotion.

“They had a great team spirit and the desire to fight for each other and that is half the battle won. I am incredibly proud of what we accomplished, but the hard work starts now, because we are not going back to the B-Division any time soon.”

In Friday’s other match, Northern Cape defeated Border 7.5 – 4.5 to finish second in the overall log.