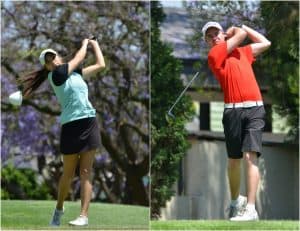 Mpumalanga’s Ru-Jean Lessingh and Central Gauteng’s Eleanora Galletti are in pole position to win the men’s and ladies’ Champion of Champions titles respectively.

Lessingh,  a +2.9 handicapper who is the club champion at Walker Palk, takes a two-stroke lead into the final round after shooting a 1-under-ar 71 at Glendower Golf Club, with Boland’s Ethan Smith and defending champion Bertie Steenkamp from Northern Cape hot on his heels after rounds of 73. Central Gauteng’s Keelan van Wyk is a shot further back and still very much in contention, as is South African Mid-Amateur champion Derek Scullard from KwaZulu-Natal, who is at +2.

In the ladies section, Royal Johannesburg & Kensington club champion Eleanora Galletti holds a narrow one-stroke lead over Free State’s Pheletso Mota. The likes of Western Province’s Vicki Traut, defending champion Caitlyn Macnab from Ekurhuleni and Gauteng North’s Gina da Silva will all fancy their chances of catching the leader over the lengthy Glendower layout, despite being a few shots back.

The GolfRSA Champion of Champion events is not only about the elite golfers, with players from three divisions for both men and women competing for the title of ultimate club champion.

In the men’s B Division, Domingos Da Conceicao of Wingate Park opened with a triple bogey seven on the first hole but recovered to take a commanding six stroke lead over Jonathan Heymans of Royal Johannesburg and Kensington and Wellington Golf Club’s Johan Brand after a fine round of 80.

I the C-Division, which is played on Stableford points, Barend Christoffel Saayman of Shark River Golf Club in Port Elizabeth shot a sublime round worth 40 points to take a huge 13-point lead, while Carin Greyvenstein of Emfuleni and Carene le Roux of Bethlehem are locked at the top of the ladies division on 34 points.