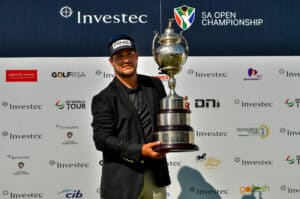 4 December 2022 – It had everything the final round of the 112th Investec South African Open deserved. And it took everything from Thriston Lawrence to do what the greats of South African golf have done before him and add his name to one of the most sought-after trophies in the game.

With a drama-filled one-stroke victory on 16 under par at Blair Atholl Golf and Country Estate on Sunday, Lawrence turned his boyhood dreams into reality and claimed his third DP World Tour victory in what has been an incredible past 13 months for him.

“Unbelievable. It’s a dream come true for me. This is the one you want to win – your national Open. It was so special to have Gary Player watching as well. He’s won 13 of these, and now I’ve got one as well. It’s what you dream of. This means everything to me. This is by far my best victory ever,” said a relieved Lawrence.

He started the final round with a two-stroke lead and at one point was as much as five shots ahead. But then came a stretch of five dropped shots in five holes on a back nine of 41 for a closing 74 where he was pulled into an almost match play battle with Clément Sordet who tied him for the lead before his bogey on 17.

“During the middle of the round it felt like it was going to be an easy victory for me and then golf happens. You get ups and downs during your round. You get ups and downs during life. And it happened to me today. It felt like everything was falling apart, but I just hung in there. It felt like match play for me. Even with those stumbles I was still ahead and then after 16 I told myself I was all square. I just tried to stick to my own game and stay calm,” said Lawrence. 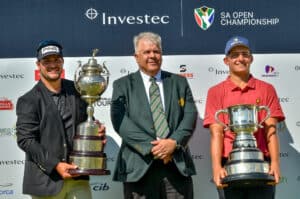 “To be standing here with the trophy is an unbelievable accomplishment for me. I’m just so grateful. It wasn’t the prettiest finish, but a win is a win. I’ll probably wake up tomorrow and still not believe it. This is what you work for. It’s the toughest thing in the world to win, and it’s been an unbelievable start to the new season for me.”

Sordet took second place on 15 under par with a closing 73.

The reigning Brabazon Trophy champion finished the week on five under par, having posted rounds of 69, 65, 72 and 77.