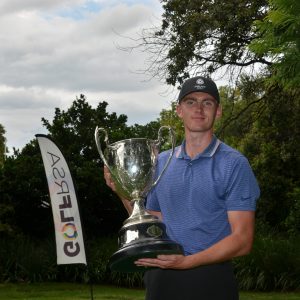 The 22-year-old from Boyce Hill Golf Club graduated from California State Fullerton University last year and has spent the last month in South Africa honing his game, finishing tie-12th in the SA Stroke Play Championship and sixth in the African Amateur Championship.

The strong form continued as Dyer followed up his opening round of 67 on the West Course with a stunning round of 66 on the East, including a late stretch of holes where he went five under par through four holes.

“It all started on the fourth where I made a solid six-footer for par to get me going,” he explained. “Then I hit a nice wedge to 15 feet on the par-three 5th and rolled that in, followed by a 6-iron to about 15 feet on the 6th that I rolled in for eagle.

“I hit two good wedges close on the 7th and 8th holes for birdie and I must admit I was a little nervous coming down the last, but that’s what it is all about and I’m delighted to get my name on that trophy.”

As the Proudfoot Trophy winner, Dyer will head into the match play part of the 119th SA Amateur as the top seed and the man to beat. 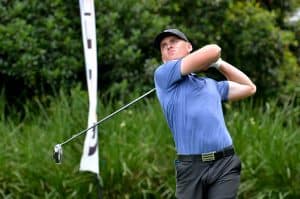 “I’m just so grateful to be able to come out here and play in South Africa at this time of the year,” he said. “I was thinking to myself today how lucky I am to be playing golf when I could be sitting at home in the snow.”

Dyer’s late charge dented Casey Jarvis’ recent assault on the amateur golfing record books, as the 17-year-old looked to have claimed yet another title with a score of 28 on the back nine that saw him vault up the leaderboard into the top spot.

Sadly for Jarvis, he had to settle for runner up spot as he heads into the match play hoping to become the first player to successfully defend his title since Thriston Lawrence in 2014.

“On the back nine I just tweaked my alignment slightly because I had been aiming a little left and it worked,” Jarvis explained. “I hit some good iron shots and rolled in some good putts, so I’m very happy with the way I played.”

With the cut coming at +5, nine players will tee it up early tomorrow for the remaining five spots in the 64-man field that will make up the first round of the SA Amateur. 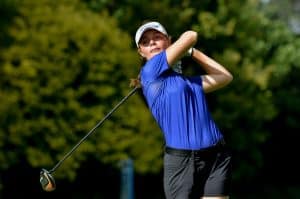 Meanwhile 17-year-old Sam Whateley remains in pole position to secure the biggest win of her career after a second consecutive round of 70 left her with a two-shot lead in the SA Women’s Stroke Play Championship on the West Course.

Ominously for Whateley, her nearest competitor is defending champion and South Africa’s No 1 ranked Caitlyn Macnab, who fired the day’s low round, a five-under-par 67 to narrow the gap and put herself in contention after an opening 75.

“Two shots is nothing, especially given the quality of players in the field, but it is still nice to know that I am leading such a big event,” said the GolfRSA B-Squad member.

“I won’t change my game plan tomorrow. I will try to make sure that I hit all the fairways and hopefully give myself birdie chances.

Whateley, who hails from Country Club Johannesburg, got off to bit of a shaky start and dropped shots on the 10th, 13th and 17th holes, but bounced back with birdies on the 12th, 15th and 18th to reach the turn at level par for the day.

Two late birdies, on the 7th and 8th, kept her in the driving seat.

Nadia van der Westhuizen and Megan Streicher are at level par, four shots off the lead, with Kiera Floyd a shot further back after a round of 69.

“I got off to quite a slow start because I wasn’t getting the ball close enough to the hole to give myself good birdie chances,” said Macnab. “It was only at the end when I started rolling a few in.

“I’m only two shots back, so anything can happen. I’ll go and work on my game now and hopefully tomorrow I can put in a strong performance.” 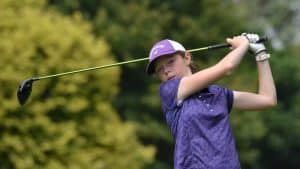 In the B-Section, 11-year-old Kaitlyn van de Vyver from Eagle Canyon carded a second round 79 on the West to open up a two-shot lead on 30 over par.

Umhlali’s Senayah Moodliar, who also registered a round of 86, is a further two shots adrift.

At the conclusion of the 54-hole SA Women’s Stroke Play Championship, the top 32 in each division will advance to the match play stage, which will be played on the East Course.