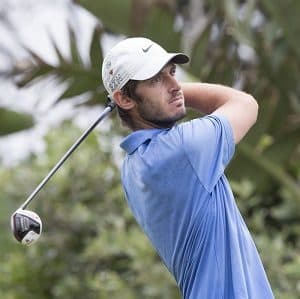 England’s David Langley led the opening round of the 36-hole Stroke Play Qualifier in the Sanlam South African Amateur Championship with a five-under-par 67 at Durban Country Club on Sunday; credit Rogan Ward / GolfRSA

25 February 2018 – Englishman David Langley finished with an eagle at Durban Country Club to lead the first round of the 36-hole Stroke Play Qualifier for the Sanlam South African Amateur Championship on Sunday.

The 23-year-old Berkshire golfer defied the weather to set the early clubhouse target with a sparkling five-under-par 67.

South African duo Otto van Buynder and Aneurin Gounden and Scottish Golf National Squad member Darren Howie posted a trio 71s to tie for second, until Calum Fyfe – playing in the last group off the first – birdied 18 for a two-under 70.

Langley erased a bogey start with a birdie at three and countered another drop at four at six before he racked up further gains at 11, 14 and 15. “The rain was on and off all day and got a little worse towards the end, but I just hung in there,” said Langley.

“I turned level and I just played the back nine perfect. The birdie at 11 gave me some momentum, because that hole was playing so hard. I hit driver, four-wood and holed the putt. The 17th was playing super tough, too.

“I thought I hit the perfect shot and came up short. I was on the downslope in the fairway. I knew it would come out low and I had 152 yards in. On a normal day I would have just hit a smooth 8-iron or 9-iron in, but I punched a 6-iron. I wanted to hit it past the pin at the front and it came out absolutely flush on the flag, but it was nowhere near. I was still 30 yards short of the green, but I made a really good up-and-down for par.”

After disappointing results in the SA Stroke Play and African Amateur, the Berkshire golfer was pleased with the solid start ahead of the top 64 cut for the Match Play stage.

“It’s nice to put a decent score on the board,” he said. “It’s a long week still, but I’ve made a good start, so we’ll see where it takes me.”

Fyfe was flawless golf until a three-putt bogey at the par three 12 ruined his clean card.

“I played solid all day, but I misjudged the putt at 12,” said the 2017 Scottish Men’s Order of Merit winner. “I had a 20-footer left and I thought it would go left-to-right and it went in the opposite direction. Other than that one hiccup I didn’t mess about.

“I missed a few short ones for birdie, but that’s going to happen with the wind and the rain. Otherwise it was a really solid round. I played the last six holes really well. By this point, it was a three-club wind and I birdied 13 and then made good pars until the birdie at 18.”

Fyfe has been coming out to South Africa with the Scottish Golf National Squad for the last few years and he was happy to be playing a course that left him feeling right at home.

“It’s a lot like the courses back home,” the Cawder golfer said. “It’s a very old course. You have find the fairways here and then you can position yourself into the greens. It’s a lot like the courses back home and I played it that way. I don’t care how far back I am from the other guys, I just tried to keep it play and planned my way to the flag from there. I knew I had a birdie chance at 18 and I made it. Game plan was good today, so more of the same tomorrow.”

Van Buynder from Blue Valley Golf Estate got off to a roaring start with three birdies on the bounce, but the Gauteng North golfer gave all three back with bogeys at four, nine and 13. “I holed a 45-footer off the green at the first and boxed 20-footers at two and three,” he said.

“I was happy to finish with a birdie. I hit a 2-iron short, but it finished short of the green and I made a great up-and-down for birdie to get back into red numbers. Hopefully I’ll move a little closer tomorrow.”

Gounden played all his junior golf out of Mount Edgecombe, but moved to Glendower just over a year ago. The 20-year-old hasn’t lost his touch in the wind, though. He overturned a bogey-bogey start with gains at three, eight and nine and cancelled a drop at 10 with a birdie at 11.

“It was quite tough out there, but I handled it well and I’m quite happy with the result,” said the Ernie Els and Fancourt Foundation player after he reversed a bogey at 17 with a birdie finish. “I love Durban Country Club; I think it’s one of the best courses in the world. It was a challenging day, but I’m in a good position with one round to go.”