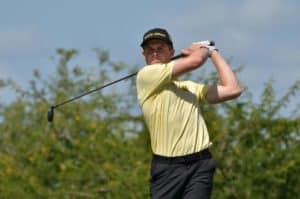 18 February 2020 – Martin Vorster birdied 17 and eagled the 18th at Royal Johannesburg and Kensington Golf Club to advance to the top 32 of the match play stage with the other three top-ranked amateurs in South Africa in the Aon South African Amateur Championship.

In a tense match, the Southern Cape junior edged Crismar Engelbrecht, who led 2-up through the turn. The De Zalze couldn’t match Vorster’s eagle on the final hole to extend the match and Vorster won the match to set up a date with fellow GolfRSA Protea Kyle de Beer.

“The eagle putt on 18 was the first putt that dropped the whole day,” said Vorster, who made an equally clutch eagle at Leopard Creek two weeks ago to get into a play-off ahead of his victory in the African Amateur Stroke Play Championship.

“I hit the ball really well today, but the putter was really cold. Crismar was struggling a bit towards the end of the front nine, and I was just making pars to be 2-up. Then he started rolling in a few putts and I found myself 1-down with three to play.

“It was tough to fight back from that, especially with the putter being cold. Match play is all about putting. I was hitting it close most of the time, closer than he was, but he ended up making the putts and I was missing. So it was really pleasing to see the putt go in in the last.”

De Beer also needed eagle on the last for his win.

“It was a very tough game,” he said. “Peter outplayed me for the first 14 holes, and I came alive a little bit down the stretch and saved it on the last with the eagle. I was five-under in my last six to get it done, and that’s a good confidence-booster going into tomorrow.”

For reigning Nomads SA Boys U-17 champion Duminy, it was relief as he struggled to beat French Boys U-16 champion Martin Couvra 1-up.

He anticipates a tasty match-up with Jarvis.

“Casey’s on form, so it should be a good game. I’m good friends with him, so I’m looking forward to it. I’ll just play my normal game, and do whatever I can to play well.”

Jarvis was pleased to have a close-fought encounter to set him up for the clash with Duminy. “It gives me a bit of confidence going into tomorrow,” he said. “I’m going to have a tough game, so confidence is important.”

The biggest win of the day came from Scotland’s Connor Wilson, who dispatched the host club’s Michael Wallace 6&4.

“I played pretty well,” said Wallace. “I was very solid towards the end and just got better as the round went on, really. I struggled off the tee at the start, but once I got the ball rolling, I hit all the fairways. I put myself into good positions to go at the flags and make some birdies.”

“My game was feeling good and I was happy to close it out early,” said Filippi, who prevailed 5&4 over Jordan Burnand. “Everything in my game was working well, but I drove it really well off the tee, and you need that in match play to put pressure on your opponent.”

Sam Simpson made it two Proudfoot victories for Western Province in a row and this year’s winner was a very happy man after he routed Christopher Gutuza 3&2. “I am so relieved that I’ve beaten the Proudfoot Trophy curse. I wasn’t knocked out in the first round, so that has done my confidence a world of good. I drove the ball nicely and putted really well, so looking forward to the next round,” said Simpson, who will meet Dutch player Nordin van Tilburg in the second round.

Written and released by Mike Green and Lali Stander on behalf of GolfRSA.