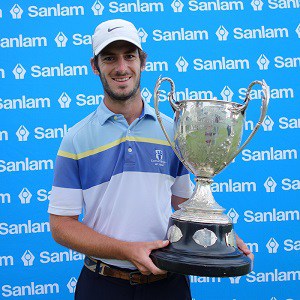 The 23-year-old Berkshire golfer threw down the gauntlet when he opened with a five-under-par 67 in the brutal conditions at Durban Country Club on Sunday.

Langley backed up his bid for the Proudfoot Trophy with a two-under 70 and sealed the top spot for the match play stage on an aggregate score of seven-under-par 137.

Luca Filippi from the Western Province produced a 69 in gusting wind to finish a further stroke back, while local golfers Matt Saulez and Jason Broomhead joined six players in seventh place on level par. 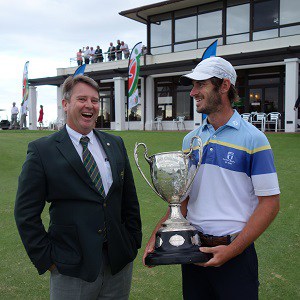 Langley – the first Englishman to triumph since Laurie won the qualifier and the Sanlam SA Amateur Championship at East London Golf Club in 2010 – was delighted to join the winners, but quickly added that this was just the curtain-raiser. “The real work starts tomorrow,” the Castle Royle golfer cautioned.

“I am really pleased and very proud, but I’ve been in this position before. Last year I shot 14-under-par to win the 36-hole qualifier for the English Amateur at the Berkshire and got knocked out in the first round. So don’t pop the champagne just yet. If all goes well, I’ll celebrate on Friday.”

The Englishman said his second round was ‘scrappy’ but he was pleased with the way he grinded out the victory.

“I didn’t start well and it got really scrappy in the middle, but I was able to fight back with a few birdies down the back nine to stay in front of the field,” he said.

Langley birdied the par-five 10th but gave the shot back immediately at 11. He followed a birdie at 13 with another drop at 14, but no-one in the morning field had come close to matching his lead at five-under and he made the turn with a two shot lead.

“I dropped another shot at the first, but made a birdie at three and another at six and then knocked it close at nine to finish with a birdie,” he said. “It wasn’t quite as tough as in the first round with the rain, but the wind blew quite hard and changed direction frequently. It was difficult to get the club selection right. I saved a lot of pars with my wedges and putter, though, and that kept the round going.”

Langley’s first round opponent will be Gregg Gilson from Gauteng North, one of six players on nine-over who to fight for the last three spots in a play-off.

“This course is so perfectly suited for match play,” said Langley. “There are so many options on every hole. There are risk and rewards holes, holes where you can score like 17 and 18, and holes pars feel like birdies. I think it’s going to be a fantastic contest.”

India’s Varun Parikh and Erhard Lambrechts from South Africa claimed the other two spots and will battle Fyfe and Van Buynder in the first round.

The Simbithi Country Club golfer holed out at the par four 18th from 243 metres with a 3-wood to book a tee time against Vorster from Southern Cape in the first round.

Written and released by Lali Stander on behalf of GolfRSA, a SAGA and WGSA Not-For-Profit