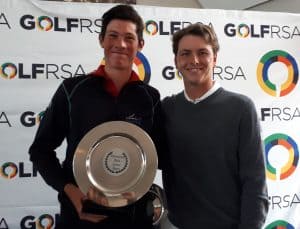 The Southern Cape junior became the first player to lift the same title twice when he defeated fellow GolfRSA National Squad player Martin Vorster by one shot on 13-under.

The victory also marked a fourth trophy finish for Lamprecht on the Sunshine Tour Junior Series. He won the Dimension Data Junior Open at Fancourt in 2016 and enjoyed double success in 2017 with victories in the Lion of Africa Open and Joburg Junior Open.

Bridge Fund Junior Series winner Sam Simpson from Western Province shot five-under 67 that netted him third on his own on six-under.

Connor de Groot, a fellow student of Paul McKenzie at the TGSE Academy in Bellville, post the best result on the last day. The 18-year-old Durbanville golfer erased a bogey at the second with birdies at three, seven and nine to turn two-under. De Groot birdied 10 and cancelled a second drop at 11 with further gains at 12, 15, 16 and 18 for a six-under 66 that earned him the lowest round honour.

Lamprecht and Vorster headed into the final round tied on nine-under and for the better part of the final 18 holes, the Louis Oosthuizen Junior Golf Academy stable-mates were still neck-and-neck.

Vorster took the lead twice – first after Lamprecht dropped two shots at the par five third and again with a birdie at 11 – but Lamprecht rallied twice to level the score.

He fired birdies at five, seven and eight to join Vorster on 11-under and reeled the Mossel Bay golfer in with a birdie at 13.

Another gain at 14 gave Lamprecht the lead for the first time and the 2018 East of Ireland winner held stayed in front with pars over the next three holes. However, Vorster had one last chance to win or force a play-off at the final hole.

“I had a tough lie with very little room to manoeuvre,” explained 17-year-old Lamprecht. “The greens are really fast and the grain ran away from me.  I tried to come out high, catch the top of the green and roll the ball down to the hole, but I didn’t get much roll and was left with a 20-foot downhill putt.”

Vorster was on the front edge with much less distance to cover.

The 16-year-old from Mossel Bay had the perfect line and pace, but it just wasn’t his day. The putt lipped and he was left with a tap-in par for a round of 69 and second on 12-under.

“That last putt was the story of Martin’s day,” said Lamprecht after he boxed the winning putt for a 68.

“We both played great golf tee to green, but the difference was the putts that dropped. It was fun to play against him, but also tough. We are really good mates and a part of me was also rooting for him,”

Lamprecht was thrilled to receive the trophy from 2018 Amateur champion Jovan Rebula.

“Jovan was home and he decided to come and watch us play,” said the 17-year-old Outeniqua High scholar. “He is such a class act and not just because he won the biggest amateur title in the world. He is a great example for all juniors and a great ambassador. It was really great that the juniors got to meet him, especially the under-15 players in the tournament

“I gained a lot of experience on the UK Tour and I learned some valuable lessons. We tend to just bomb drives, but you win tournaments with good course management. You need to understand the conditions and plan your shots to optimise your chances to score. I did that well today.

“I made a brilliant up-and-down from nowhere at 10 when I overshot the green with my tee shot and landed in a divot. I made crucial birdies at 13 and 14 and I came up with a good solution at 18. I don’t think I have moved up a level yet, but it’s all am moving in the right direction.”