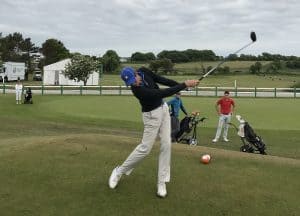 GolfRSA National Squad player Christo Lamprecht has a one shot lead at the halfway stage of the East of Ireland Amateur Open at County Louth in Ireland; credit GolfRSA.

4 June 2018 – South Africa’s youngest ever Sanlam SA Amateur champion Christo Lamprecht is causing quite a stir in County Louth after maintaining the lead in the East of Ireland Amateur Open on Sunday.

Lamprecht was put through the wringer during his introduction to links golf in the Flogas Irish Amateur Open, but the GolfRSA National Squad player appears to be a quick study.

The lanky George golfer went around the Baltray Links at County Louth in 66 strokes to grab a share of the six-way tie at the top on six under. He started and finished with bogeys in round two, but racked up six birdies in between to post a second round 68.

The 17-year-old moved to 10-under. He leads by one from former Irish Boys International Devin Morley and is two shots clear of another local favourite Tiarnan McLarnon, the 2015 Irish Close champion.

“We didn’t have a lot of wind to deal with in the first round and I was never in any trouble, but the wind showed up in force on Sunday,” said Lamprecht, a member of the Louis Oosthuizen Junior Golf Academy at Pinnacle Point Golf Estate.

“We played in a two-club wind for most of the round and it was definitely a bit trickier. I struck the ball well and I missed a few fairways, but my iron-play was really good. I started on the tougher nine (back nine) and dropped the first, but made three birdies over the last four holes to turn two under.

“I was a little disappointed not to birdie the two par fives – two and three – but I made a great birdie on the fourth, which is a really tough par four. I birdied five and six, as well and just let one more go with a soft bogey at nine.

“All in all it was another good day with very few mistakes. I’m feeling good about my game and I just need to keep it together on Monday. It’s a long day with 36 holes, so it’s still far from over.”

Mansfield from KwaZulu-Natal moved into the tie for 13th on four-under with rounds of 69 and 71, while Nel from Free State and Schaper from Ekurhuleni finished a further shot back.

Nel from the Ernie Els and Fancourt Foundation also held a share of the lead on six-under, but returned a 75 to slip into joint 19th with Grant Veenstra Junior Academy player Schaper, who registered rounds of 71 and 70.