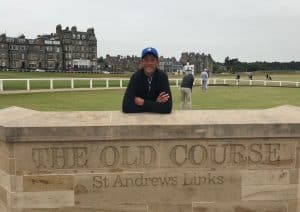 Lamprecht back in pursuit in Links Trophy

10 June 2018 – Barely a week after he went wire-to-wire in Ireland to become the youngest champion and first foreign winner of the East of Ireland Amateur Open, Christo Lamprecht is in pursuit of another prestigious European title in Scotland.

Englishman Laird Shepherd shot 65 on Saturday to lead the field in the St Andrews Links Trophy at eight-under.

Lamprecht lies just two off the pace after he fired himself into contention with a flawless five-under-par 67 in his first competitive round at the legendary Old Course at St Andrews.

“I’m really pleased to start the last two rounds just two behind the leader,” said the GolfRSA National Squad player. “I’ll stick to my game plan and hopefully I can stay in touch with the leaders in the third round and give myself a shot at the title in the final round.”

Only 26 players in the 144-strong starting line-up broke par on the New Course in round one, including Lamprecht and compatriot Luca Filippi from Western Province.

The 17-year-old George golfer, who opened with a one-under 70, racked up birdies at two, three, five, 10 and 16 to catapult into contention.

“The first birdie of the day was a bit of a surprise,” said Lamprecht. “I hit my drive left and found my ball in the long grass. I hit my second over the green, but I holed a long putt and that settled me down and gave me a positive lift. Something clicked, because I hit a really good drive down the third fairway and made another birdie.

“After that I struck the ball really well and made very little mistakes. I hit another good drive at the fifth and two-putted for birdie. I hit my tee shot just short of the green at 10, chipped it close and made the putt for birdie.

“I was really pleased with the birdie at 16. It’s one of the toughest holes I’ve ever played. It’s very tight with out of bounds all the way down the right. I hit a great drive down the left and a sand-wedge in to six foot and holed the putt.”

“The flag was on the right, almost in the same spot as they put it on the final day of the last Open. I pulled my tee shot left and I told myself not to hit it too hard,” Lamprecht said.

“Of course I hit it right over the green, over the cart path and bounced off the wall. I was two metres from the wall, but I didn’t have a lot of green to work with. It was a really tough shot. I just wanted to get it on the green, two putt and walk. The ball was lying in a sea of grass and I hit my wedge perfectly. It pitched six feet from the hole and I made the par-save. I still don’t know how I did it, but it was one of the best shots of my life.”

Lamprecht received a message from his dad, Christo Snr, the night before he challenged for the East of Ireland title and it has served him well in Scotland, too.

“The message said ‘you’ll never win when you’re too scared to lose’. It really helped me on the last day in Ireland and here in Scotland,” said Lamprecht. “In this game you think a lot, sometimes too much. The message put things into perspective. I play to win, but I’m not scared to lose anymore.”

Ernie Els and Fancourt Foundation members Filippi and Nel opened with respective rounds of 68 and 75, while Saulez from KwaZulu-Natal carded a one-over 72 at the New Course.

Filippi went around the Old Course in 74 strokes to grab a share of 17th on one-under.

Nel reeled in three birdies on the front nine and turned two under. The Bloemfontein golfer countered a pair of bogeys down the back with birdies at 10 and 16 and signed off in style with an eagle at the par-four 18th for a 68.

Saulez mixed four birdies with three bogeys for a one-under 71.

It was heartache, though, for fellow squad members Malcolm Mitchell and Jovan Rebula, who missed the cut by just one shot.

Mitchell from KwaZulu-Natal made four birdies on the bounce to turn four under, but a seven at the par-five 14th and bogey at 17 saw him close with a 70. Rebula racked up five birdies over the first nine holes, but a double bogey at 16 and a bogey at 17 for a 71 put paid to his challenge.