Playing off a +1 handicap, Centurion’s Kim Williams won the Nomads Strokeplay Championship on a one over par 145, four strokes ahead of her Gauteng North team-mate Henriette Frylinck and Gauteng’s Lauren Bekker on 149. KZN’s Pam Hayward and SA Order of Merit leader, Bertine Strauss tied in fourth place on 152.

The first tee off time was 6.53am on both mornings of the event played this week at Kyalami Country Club, with a temperature of about two degrees on the first day and slightly warmer on the second. The maximum temp during the day was 14 degrees. The wind was very chilly but not strong.

Helena Buitendag of Ficksburg, who recently topped the B Division at the Nomads SA Girls’ Championships, won the 10-18 Division on a 172, while Colleen Lawson of Wanderers was the Nomads Bronze Champion on 188.

Bertine Strauss of Rustenburg picked up the Champion of Champions Trophy. The event attacted 44 players in the 9 and under division of which were 16 were juniors and seven of the 34 players in the 10-18 Division were also 18 years and under. 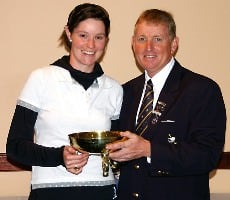