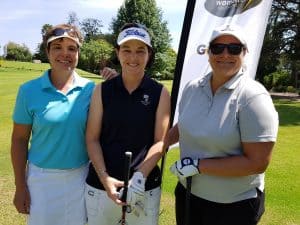 KRUGERSDORP, 5 November 2018 – “New” kid on the block Liezl Smit from KwaZulu-Natal upstaged the country’s leading golfers to take the first round lead of SA Women’s Mid-Amateur Championship on Monday.

The Vryheid golfer carded a four-over-par 76 at Krugersdorp Golf Club to open up a three shot lead over two-time former champion Vanessa Smith from Western Province.

Defending champion Sandra Winter didn’t get off to the best of starts as she hunts record fifth championship title. The Southern Cape golfer opened with a 10-over 82 to tie for fifth with Karin Watts from Services Golf Club.

Smit represented KwaZulu-Natal at junior and senior level, but put her clubs away in 2007 to spend more time with her family. She made her competitive return this year and was surprised and pleased to be leading the pack.

“My daughters Marli and Annika started playing competitively and I would drive them to the tournaments, so it made sense to dust off the clubs again,” said the 42-year-old. “It was a lot of fun out there playing with Vanessa and Sandra. I played junior golf against Vanessa and Sandra and I represented KZN for years. It was like a big reunion.”

Smit was happy with the start, but felt it could have been better, especially after two soft drops at the seventh and eighth.

“The highlight was obviously the birdie at six,” she said. “The par three played 125 metres to the flag, which is the perfect distance for an 8-iron for me. I hit it to 10 foot and holed the putt. But I was annoyed with myself for dropping on the next two holes.

“I missed a really short putt at the par five and three-putted eight. Other than that, I drove the ball really well and my short game was solid. Its early days, though, and Vanessa and Sandra will no doubt warm up.”

Smith was tied for the lead with one hole to play, but a triple bogey at 18 saw her slip into second.

“Most annoying,” said the Milnerton golfer. “I was in the bunker for two. I hit it clean over the green, chipped up and made a fast seven with a three-putt.

“Other than the disastrous finish it was a great round. The course is in fantastic shape and it’s such a fun layout with all the dog-legs. Definitely scoring opportunities out there; I just need to make it happen in the next two rounds.”