KZN Win as do Southern Cape 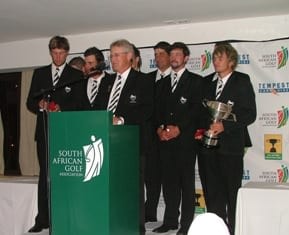 DURBAN, 25 September 2009 – Ten years and a month to the day of their last A-Section victory, Kwazulu-Natal won their seventh South African Inter-Provincial at Durban Country Club on Friday.

“It’s an incredible moment for the whole squad,” said an elated skipper Ryan de Beer, who capped his amateur career by leading his squad to an undefeated victory just 12 months after they earned promotion to the A-Section in Hermanus.

“We worked exceptionally hard for this win, right down to the last game in the last match. We never took anything for granted. This morning, Central Gauteng took the foursomes 3 & 1 and every man on the team knew we had to dig deep to turn things around.

“We managed to win five of our singles games to force a draw and like I’ve said all week, we are a team that bats from one to eight; there are no superstars, the whole team contributed and that’s why we pulled it through.”

Team manager Ivan Curlewis agreed, saying that every man in the squad could fairly share in this triumph.

“I am incredibly proud of our team, for their complete commitment to the team, their selfless devotion to each other and for sticking it out through the hard times to pull off an incredible victory for us here at home.”

Kwazulu-Natal dished out a 9 ½ – 2 ½ beating to defending champions Western Province to launch their bid for a home win and beat second placed Free State and Gauteng, 2008 runners-up Boland and Gauteng North before sealing the title with a 6-all draw against Central Gauteng in the final round. The draw, worth one point, saw the local favourites top the final log with nine points.

Free State recovered well after Thursday’s drumming by KZN and, despite a shaky start to the foursomes, erased the two shot deficit with five singles wins to draw six-all with Gauteng North and seal their second place in the log with seven points.

Western Province laid the foundation for a win over their neighbours with a 4-0 thumping in the morning’s foursomes. Boland put up a brave fight, but the defending champions managed to hold off the charge to win 7-5 win, claiming third place on six points.

Boland took fourth on four points, with Central Gauteng in fifth on two points and Gauteng North’s one point from their draw with KZN will see them back next year, relegated to the B-Section.

In their first appearance at the Inter-Provincial since it’s inception in 1960, Southern Cape wrote their names into the history books when they clinched the B-Section honours by one point from Eastern Province.

The youthful side, who lost just one match to Ekurhuleni on their way to the final round, coped extremely well with the pressure of having to win both their final round matches to claim the title.

Having beaten Mpumalanga 9-3 after a 3-1 win in the foursomes, Southern Cape added five singles to their 1 ½ points from the foursomes against Eastern Province to win that match 6 ½ to 5 ½ for that final two-points to seal the victory.

Eastern Province beat Ekurhuleni 6 ½ to 5 ½ to take second place on nine points, while North West lost 7-5 to Limpopo and dropped to fifth place in the log on seven points behind Ekurhuleni, who finished with eight points.