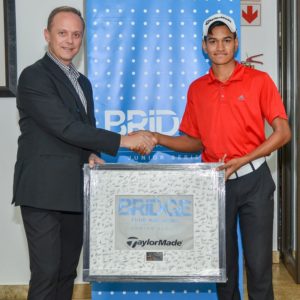 24 April 2018 – A birdie at the closing hole for victory in the Bridge Fund Managers Junior Series North final made the two trips to Gauteng worthwhile for KwaZulu-Natal junior Nikhil Gopal.

The KwaZulu-Natal junior fired rounds of 70 and 71 at Royal Johannesburg and Kensington’s East Course to edge out Ryan van Velzen by one shot for victory.

Ironically, Gopal and Van Velzen had gone toe-to-toe for extra holes in the Benoni qualifying event in March at Benoni Country Club.

“I didn’t play well in our qualifying event at Royal Durban last September, so I convinced my dad to give me another shot,” Gopal explained. “The Benoni event fell over a long weekend, so he agreed and we flew up. Ryan and I both shot three-under-par 69, so we had to play off for the win. After four holes, the light was failing and they declared us both winners.” 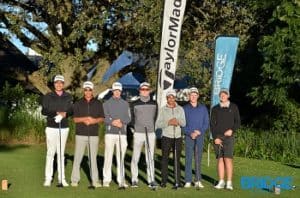 South Africa’s number one junior Jayden Schaper and 13-year-old Kiera Floyd, who beat the boys at the Royal Johannesburg and Kensington with a seven-under 65 at the East Course, both had to withdraw from the North final due to schedule clashes.

Rose made the most of his home course advantage to take the 18-hole lead, but Gopal burst into contention with an eagle at the first hole of the second loop.

“I hit a good drive but had a poor lie, so I punched a 6-iron down the hill to eight foot and made the eagle putt,” said the Grace College learner. “It was a key putt, because I went from two back to one ahead in a single hole.”

The lead changed hands several times during the afternoon round, but as Gopal headed down the final hole, he had a one shot cushion over clubhouse leader Rose and playing partner Van Velzen. 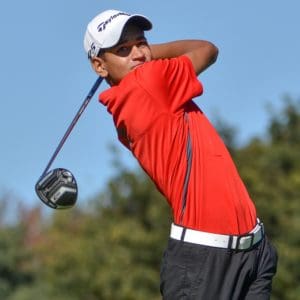 “I drove into the right rough, but I had a good lie,” he said.

“I was 220m out, uphill and hit my 2-iron to the front edge of the green. I left my first putt nervously short and Ryan sank his birdie to tie. I had a three-footer to win, but it felt more like 10 feet. I work with a sports psychologist and we focus on breathing techniques, so I just stayed with the process, but it was a huge relief when the ball disappeared down the hole.”

Gopal’s birdie at the 36th hole means he will be joining reigning SA Amateur champion and 2018 Nomads SA Boys U-19 Stroke Play winner Deon Germishuys at Pinehurst in June.

The pair will represent the South African challenge at Pinehurst, where 90 boys and 90 girls will compete for the prestigious crown over 54 holes. Former winners include Jack Nicklaus.

Gopal, who is coached by Luke Kelly at Golden Horse Driving Range in Pietermaritzburg, was understandably delighted with the outcome.

“Although it meant two trips to Gauteng it was worth it,” said the Hilton teenager.

“I am super stoked with the victory. Normally only the players that are selected to the senior and junior national squads get to represent South Africa abroad.

“When Bridge Fund Managers created this amazing new opportunity for us, I really wanted to qualify for the final. The Junior North and South Championship is one of the most prestigious junior tournaments in the world. And I’ll get to play at Pinehurst number 2, which is a US Open course.”

And the good news keeps coming!

On Monday Gopal was selected to the eight-man Presidents Team that will do battle against the SA Juniors and teams from Gauteng North, Western Province, Central Gauteng and the SA Universities in the annual SA Challenge Cup at Irene Country Club from 13-15 May. 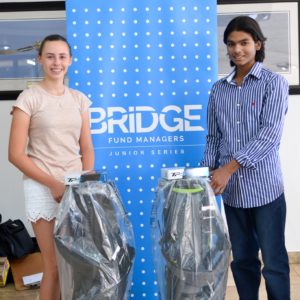 The Under-13 Division winners were Amilkar Bhana and Stephanie Barbaglia.

The Bridge Fund Managers Junior Series featured 16 events and was managed by Peter Little from the South African Golf Development Board (SAGDB).

The series was played at celebrated golf courses across the country and was open to boys and girls in the Under-13 and Under-19 divisions. The first event teed off at Royal Cape in July 2017 and set the standard for tournaments which have attracted bumper fields and some of the country’s best junior golfers.

“We had incredible support in our first season with just over 1,200 juniors competing in the Under-19 and Under-13 Divisions,” said Little. “Each provincial union was invited to enter eight SAGDB members in their respective events, with Bridge Fund Managers covering their entry fees. In the end we were oversubscribed in many events and had about 212 SAGDB members competing.”

The series saw golfers from the SAGDB seize the opportunity to display their talents.

Hilmi Mallick and Cole Stevens both tied for the lead before losing electrifying play-offs at Strand and The Wanderers respectively before Keyan Loubser triumphed in East London in January 2018.

“This is only the first year of the Bridge Junior Series and it has already exceeded our expectations,” said Paul Stewart, Executive Director at Bridge Fund Managers. “It is all about giving junior golfers opportunities, so it has been particularly rewarding to see the girls and the SAGDB golfers demonstrating they need stand back for no-one.”

GolfRSA CEO Grant Hepburn said the Bridge Fund Managers Junior Series proved extremely popular. “We were amazed at the big fields at some events and we witnessed some thrilling challengers that went down to the wire. It is a fantastic initiative giving opportunities for our juniors to hone their tournament craft and make new friends,” he said.

Written by Lali Stander and Doug Carew on behalf of GolfRSA and Bridge Fund Managers.