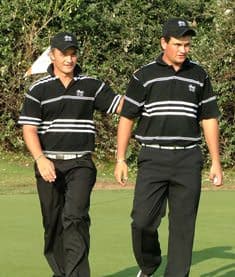 DURBAN, 21 September 2009 – The Kwazulu-Natal team provided manager Ivan Curlewis the strong start he expected with a near whitewash in Monday’s first round of the 49th South African Interprovincial at Durban Country Club.

Captain Ryan de Beer and Gavin Sole partnered for a 3/2 win over Werner Theart and Aaron Russell, while Adrian Ford and Nicol van Wyk went 3/2 down to Jared Harvey and Daniel Greene. Michael Hollick and David Brown sealed the trashing with a 1-up result over Le Riche Ehlers and Justin Turner.

Needing to secure just three wins in the afternoon singles to claim two valuable points for the A-Section log, De Beer led the way with a 5/4 win over Oosthuizen, with Van Heerden, Sole and Greene and Harvey following suit for a 9 ½ to 2 ½ result.

“Obviously turning 4-0 in the morning was a dream start and then to dominate this afternoon… we couldn’t have started any better,” said De Beer. “We had quite a bit of pressure on us. KZN has never lost an Interprovincial at Durban Country Club and we knew we would have to start hard to get ourselves into a good position for the week.

“Just out of promotion, we knew we would face the defending champions and that they would be a tough side to beat. The outcome today was worth all the hard work that went into the training sessions and the preparation we put in.”

Significantly, there were no obvious stars in the Kwazulu-Natal side, but rather a squad that played solidly, both as individuals and as a unit.

“Look, we took a beating today, but there are still four days of competition left and things could swing the way of our team on Tuesday. The KZN boys played extremely well, from the tee through the short game and on the greens. They were especially lethal on the greens and all credit to them,” said Smith, who admitted that he expected more from his team.

“I thought Adrian and Nicol – guys that play at the highest level – would adjust quickly to the conditions, but that obviously didn’t happen. But that’s golf; you can never predict what will happen. Today it went downhill for us, but tomorrow it might be our turn to shine.”

Free State and Northern Cape will go into the second round with some serious confidence after scoring two crucial points in the log standings in a convincing decision over last year’s runners-up, Boland, who struggled without the depth of experience of Jacques Blaauw, Johan de Buisson and Keenan Davidse, who all turned professional at the end of 2008.

After a two-all draw in the foursomes, Josef Fourie’s team rallied with five points in the singles for a seven point total against Boland’s five.

Central Gauteng is smiling after nullifying Gauteng North’s 3/1 foursomes lead with 6 ½ points in the singles to earn their two points for the log on 7 ½ points to 4 1/2.

Playing in the final pairing, Glacier SA Amateur champion Ryan Dreyer hit back with a 4/2 win over Derik Ferreira to put an exclamation mark on Central’s comeback that will see them start the second round in a tie for the lead with KZN and Free State & Northern Cape.

In the B Section, both Eastern Province and North West Province got off to good starts collecting maximum points from their two games.