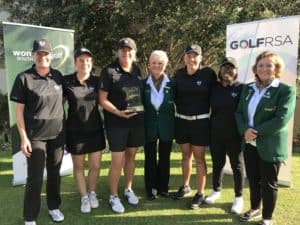 29 September 2017 – KwaZulu-Natal won the B-Section in the 57th South African Inter-Provincial Championship with an unbeaten performance at Mossel Bay Golf Club on Friday.

After losing out to Southern Cape in a count-out at Umhlali Country Club last year, the 2001 champions made a fast start to the championship and finished within three strokes of Western Province B in the 36-hole seeding round.

KwaZulu-Natal laid down a marker with a clean sweep against Free State in the first round of match play, but Western Province B was right on their heels, levelling the score at two points all with a 4 – 2 result against Gauteng North 4 – 2.

At the end of the second round, the two teams were still tied on four points after KwaZulu-Natal won a tough contest with Gauteng North B 4 – 2 and Western Province B edged out Free State 3.5 – 2.5.

“We only had a narrow lead of 2.5 games points heading into the final round against Western Province B, but having come through the first two rounds unscathed, I knew we had the depth in the team to pull it through,” said KwaZulu-Natal captain Bronwyn Rae.

“However, we knew it would be a tough final, because Western Province B are just as adept at playing in the wind as we are. I asked the players for complete commitment in the foursomes and they delivered. Both our foursomes games went right down the wire, but we never stopped fighting.

“We won both games at the 18th hole to start the singles with a 2 – 0 lead. We backed ourselves in the singles and all I asked from the players was that they leave nothing out there.”

The skipper led by example and beat Odette Booysen 4 & 3 to claim the first scalp.

Jessica Shurety knocked out Laylaah Abrahams 3 & 1 to take KwaZulu-Natal to five points. Iman Adams put the brakes on their winning run when she downed Lizzie Currie 4 & 2, but Elsune Roode drove the victory home with a 3 & 2 result over Aaliyah Abrahams in the final match.

The final result was a resounding six points.

“I am incredibly proud of everyone on the team for pulling together the way we did over the four days of the championship,” said Rae.

“We were devastated when we were relegated in 2015 and it feels absolutely fantastic to go back to A-Section. We worked really hard on our combinations for the foursomes for this year’s championship, because a fast start is key in this format. Every player on the team contributed to this victory and you always knew someone would have your back if you were struggling. We would also like to thank you to our manager Tania Lyon for her unwavering support, doing all the running around this week and just paving the way for us to finish in the winner’s circle.”

Gauteng North B defeated Free State in the other Division 1 match with Gauteng North claiming a 3.5 – 2.5 victory to finish third in the log.

Mpumalanga finished the week at the top of the Division 3 log, earning five points after a 3-all draw with North West in the final round. Limpopo beat Northern Cape 4 – 2 to finish third in the standings.