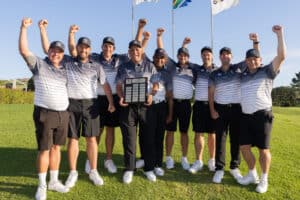 20 October 2022 – KwaZulu-Natal rallied for a hard-fought for B-Section victory in the 2022 South African Mid-Amateur Inter-Provincial as the battle for supremacy went down to the wire at Devonvale Golf & Wine Estate in October.

After four days of intense clashes, three teams would fight for promotion. But who wanted it more – Boland, Northern Cape or KwaZulu-Natal?

The trio of teams had all amassed 6 points, but Boland had pole position on the log with just the slightest of advantages… 27.5 games points versus the 26.5 of KwaZulu-Natal and Northern Cape’s 25.5.

With everything to play for, Northern Cape went on a tear and routed Boland 9 – 3, destroying the host union’s hopes of a home win.

“That put as at 8 points and we had 34.5 games points. We were in a strong position, but we wouldn’t know if we did enough until the match between KwaZulu-Natal and Southern Cape. The waiting game began and it was absolutely nerve-wracking. As the saying goes, “It ain’t over until the fat lady sings,” said Northern Cape manager Francois Mulder.

Mulder was right to be apprehensive, because KwaZulu-Natal was mowing their opponents.

The coastal side had made a solid start in the foursomes to lead 3 – 1 and carried that momentum into afternoon session. Ashwin Krishen played a captain’s innings, beating Southern Cape skipper Nicholas Mitchell 6 & 4 and setting the bar in the singles.

Andre Smit, Graham Dickinson and Matthew Sutherland racked up further points, and while Jean-Marc Bouic went down 4 & 3, halves from Chris Zietsman and Gavin Sole kept KwaZulu-Natal on the attack.

The side led 8 – 3 and the outcome rested on the shoulders of KwaZulu-Natal No 1 Jan Mc Dermott.

His opposite number Jason Kouries had birdied the 17th to go 1-down, and if the Southern Cape golfer could beat Mc Dermott on the final hole, KwaZulu-Natal and Northern Cape would be tied.

“All the KZN and Southern Cape players, and the entire Northern Cape side were around the ninth waiting for the drama to play out. The tension was palpable, and that made the victory even sweeter.

“Last year’s relegation was a hard pill to swallow, and I am incredibly proud of the team. We are delighted to be back in the A-Section. I do want to congratulate Francois and his boys. It was a tough break for them, and it will hurt, but they should take a lot of confidence out of their performance. They worked really hard to give themselves a chance and they will be the team to watch next year.”

“I am incredibly proud of the effort from every member of this team,” he said. “Hats off to the team for all the preparation and for seeing it through from start to finish. Well done to Ashwin, who did an exceptional job, leading by example, keeping the spirits up and the players motivated.

“No team can succeed without support, and we had plenty. Thank you to the union for their support, and to all the wives and partners who gave our guys as much time as they needed to prepare for this year’s battle.

“Finally, a big thank you to Ryno Bernado and his team at Devonvale and to Boland Golf Union for a superb event. Not only were we presented with a fantastic test and a pristine golf course, but the attention to detail was top class.

“Mission accomplished and now we can work towards our next target – to lift the A-Section trophy in 12 months.”

Former professional Titch Moore, who returned to the amateur ranks this year and made his debut for Southern Cape, tied Dave Barnard from Boland for the Most Valuable Player honour. The pair finished with 8 points each.