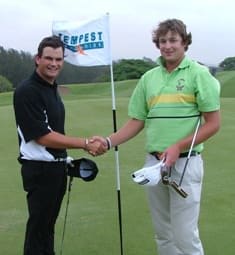 Kwazulu-Natal are on course to claim the 49th South African Inter-Provincial Tournament after extending their advantage over Free State & Northern Cape following Thursday’s fourth round at Durban Country Club.

Although the sun broke through after three days of incessant rain, the nippy Northwest wind did the visitors no favours and Kwazulu-Natal quickly opened up a two-point advantage in the morning foursomes.

KZN skipper Ryan de Beer, who is capping his amateur career with this event and plans to turn pro at the end of the year, teamed with Gavin Sole for a 2 & 1 victory in foursomes. De Beer led from the front in the singles, handing Andre van Zyl an 8 & 7 thumping to set the stage for a near clean sweep.

The hosts collected six and a half out of a possible eight points in the afternoon singles for a 9½ – 2½ pounding, leaving them needing just a further four and a half game points from Friday’s final round match against Central Gauteng to lift the title.

Defending champions Western Province enjoyed a solid 7½ – 4½ win over Central Gauteng, whose task it will be to stop the Kwazulu-Natal express on Friday.

The final round in the B-Section is building up to a real cliffhanger.

Eastern Province and North West, joint leaders on six points after round three, enjoyed a bye with Southern Cape today, which left the door open for Ekurhuleni to earn a win and two points against Border and shift to the top of the log on eight points.

Given the permutations, the race will be decided between these four teams and chances are that the winner for the B-Section will be determined by game points.

In Friday’s final round, Eastern Province (7 points) will meet Ekurhuleni (8 points), while North West (7 points) will face Limpopo, who beat Mpumalanga 8½ – 3½ today. Southern Cape stands on 6 points, but will have two matches against Mpumalanga and Border, which could change the face of the result dramatically.