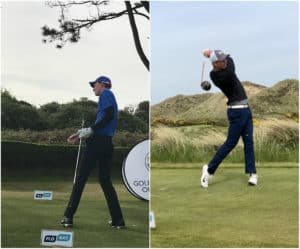 21 May 2018 – Chris Woollam and Matt Saulez closed out top 10 finishes at Royal County Down Golf Club as Ireland’s Robin Dawson completed a wire-to-wire victory in the Flogas Irish Amateur Open on Sunday.

Tramore’s Dawson survived some back nine drama in a final round 77 to close out the biggest victory of his career on two-under 282. The former South African Stroke Play runner-up won by four strokes from compatriot Alex Gleeson and England’s John Cough.

Woollam was joint sixth and 14 shots off the pace heading into the final round. The Sanlam SA Amateur finalist produced a final round 73 to tie Englishman Laird Shepherd for fifth on eight over.

“I am really chuffed with the way the week turned out,” said Woollam, whose scorecard on the last day featured an eagle at 12, a double bogey at 17, birdies at eight and 10 and four bogeys.

“It was a grind from start to finish, which was what the course demanded, but I was fortunate to stay in control and play well when it counted. I hit the ball really solid this week, kept it straight and in the safe parts of the course. I kept myself out of trouble for most of the tournament and I didn’t have make up for too many lost shots. I tried to stay as steady as possible and it turned out to be the right approach. “Royal County Down is a true test of golf and requires your full attention on every shot. It was an unbelievable experience to play on such a challenging layout and to put my game to the test and hopefully i can keep up my momentum going into the Brabazon next week.”

Fellow Durban Country Club golfer Saulez teed off on seven-over. He offset five bogeys with birdies at five, seven, 12 and 18 for a 73 to finish a further shot back.

“The weather once again was brutal but I played great in the last round,” said this year’s SA Stroke Play runner-up. “It was a very up-and-down week, but my strength was my driving and I hit it very well off the tee. It was nice to be rewarded by finishing seventh. I take a lot of positives from this and I look forward to getting some good work done ahead of the Brabazon Trophy.”

Clayton Mansfield made it a KwaZulu-Natal triple for the South African challenge in Newcastle when he closed with a 72 to tie for 13th on 10 over.

Therion Nel from Free State had a rough second round that began with a nine at the par five first and ended with an 80. The Bloemfontein golfer rallied with 72 in the third round and produced his best round of the week on Sunday – an even-par 71 – to join Mansfield on 10 over.

“I really enjoyed this week,” said the Ernie Els and Fancourt Foundation member. “It was amazing to experience how very differently you had to approach this course. There isn’t a course in South Africa that prepared us for Royal County Down.

“I was astounded to see how fast you could leap up the leaderboard with a level par round and the highlight for me was to be 10 metres from a hole and putting. This was a real challenge and the reward feels 10 times greater when you play at this course.”

Malcolm Mitchell, the third player from KwaZulu-Natal in the GolfRSA National Squad group on the tour in the United Kingdom, agreed.

“I have had some incredible international experiences with GolfRSA but this week takes top prize,” said Mitchell, who finished at 14 over after a final round 75.

“From starting in perfect scoring conditions to the extreme cold and wind on the final day, this course put us all through the wringer. It tests every shot in your back and your capacity to stay patient. You just have to keep grinding and sometimes a double bogey is what it is.

“We are so used to attacking the pins at home and this course is completely different from anything we’ve played before. The whole squad will walk away from this week better players.”

Western Province’s Deon Germishuys closed out a joint 44th place finish on 17 over.

“This was undoubtedly the trickiest course I’ve ever played and it’s been a real privilege to have had this experience,” said the reigning Sanlam SA Amateur champion. “The course was in good condition and the tournament really well organised. I am extremely grateful to GolfRSA for having had the opportunity to play this tournament. It was an unforgettable experience.”