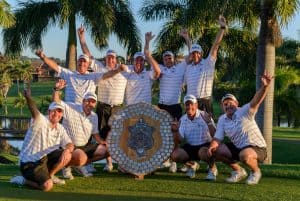 They say it’s never over until the last putt drops, and that proved the case in this year’s SA Country Districts as KwaZulu-Natal fought their way from the bottom of the log to claim A-Division victory at San Lameer Country Club on Friday.

After two days lost to unrelenting rain pounding the South Coast and rendering the course unplayable, the championship finally got underway on Wednesday, 15 May.

“We had a first round bye, so the guys who played in the morning were nicely warmed up,” said KwaZulu-Natal manager Wynand de Swardt. “We were pretty confident going up against North West Province in the second round, but came out guns blazing after beating Free State 6.5 – 5.5.

“We made the worst start imaginable to our title bid when we lost 7.5 – 4.5 and we knew we needed two very strong performances on Thursday to have any hope of saving our campaign. I asked the guys to dig us deep as they could, and boy, did they deliver.”

KwaZulu-Natal whipped Mpumalanga 8 – 4 in the morning to and mowed down Free State 7.5 – 4.5 to rocket to the top of the log.

“We managed to secure four points and we edged out North West for the number one spot on games points,” said De Swardt. “We had 20 to their 19 games points, so it was tight and Mpumalanga was also still in the running. They were tied with Free State on three points, but Free State had a final round bye, so it was between the three teams. And Mpumalanga had 21.5 games points.

“There was a serious mood in the camp, because the team knew that the fight was far from over. We needed to win our last match and we needed to win big to beat North West and Mpumalanga on games points if it came down to a count-out.”

KwaZulu-Natal went up against Boland, while North West faced Mpumalanga on the final day.

The men in black struck gold in their first Foursomes game, but lost the next two and the final game was halved.

“We were going into the Singles on the back foot and we needed a tremendous retaliation to turn things around. Jens Hillerman and Ryno Crous got us that start and the rest of the boys stepped it up to pull off the 8 – 4 win that sealed victory for us.”

Boland’s Riaan Rooi downed Graham Fabricius 2-up, but the writing was on the wall.

Derek Scullard was 1-down with three to play against Hennie O’Kennedy from Boland in the last match, but the seasoned veteran won 16 with a par and birdied 18 to win 2-up. Thomas Lovett drove the final nail in Boland’s coffin when he halved against JF Conradie.

“North West Province and Mpumalanga were still out on the course and it was pretty tense as we waited to see what the outcome would be,” said De Swardt.

“North West won 7 – 5 to tie us with six points, but in the end, all the hard work the team put into the Singles paid off. We had 28 games points and North West 26. It came down to a narrow victory, but those two games points made all the difference.

“It was a great moment when we got to lift the shield. That moment signified all the blood, sweat and tears it took those eight players to fight from the bottom of the log to victory. The quality of golf at this year’s inter-provincial was simply outstanding and our players showed a lot of character to turn things around. There were eight heroes at San Lameer and they all deserve credit for our success.”