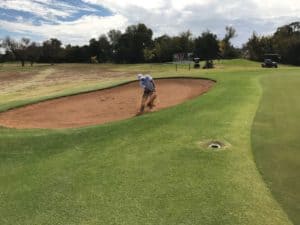 Daniel Clifford from Mpumalanga plays from the bunker at 6 during round 1 of the SA Country Districts at Potchefstroom GC.

14 May 2018 – KwaZulu-Natal and North West will start Tuesday’s second round of the SA Country Districts deadlocked at 2 points each after both teams made an excellent start in the A-Section battle for glory at Potchefstroom Country Club.

KwaZulu-Natal beat a feisty Mpumalanga 7 – 5 and the host union ousted a resurgent Free State by the same margin.

Taking a 2.5 – 1.5 lead into the Singles, Graham Fabricius scored an early 5 & 4 win over JPF du Toit to keep KwaZulu-Natal in pounds seats. Thomas Lovett, Corne van Deventer and number one Jens Hillerman racked up three more points and Christopher Thorpe halved with Ryk Lacock to secure victory on day one.

North West also made a strong start in the Foursomes and had a tidy 3 – 1 lead against Free State going into the Singles.

Ray Janse van Rensburg beat Lourens Erasmus 5 & 3 to take the side to 4 points, and Johan Krugel and Herman Anderson made it 6 for North West. The Free State posse hit back hard to try and force a draw.

Pieter Swartz won 3 & 2 against Aldre Terblanche, while Josef Fourie and Jacques Schutte both won 1-up, but it was too little, too late. Halves from Oliver Goldhill and Albert Britz helped North West to bag their first win.

Limpopo joins the action after a first round bye and take on KwaZulu-Natal, North West plays Mpumalanga and Free State has the chance to regroup in round two.