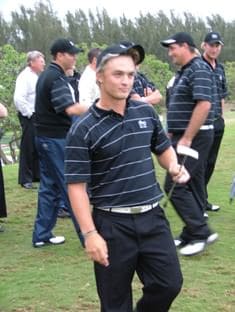 Following on their near clean sweep over Province on Monday, Kwazulu Natal had to rely heavily on the singles to pull through a successive win today (Tuesday), in the second round of the SA Inter-Provincial being played at Durban Country Club.

“Truth be told – we came out far too confident today and paid the early price,” admitted skipper Ryan de Beer. “Before the singles, we regrouped and took stock. We are a team that can bat from one to eight and we just needed to remind ourselves.”

Rank outsiders Free State and Northern Cape have emerged as the giant killers.

The inland team threw Boland off kilter on Monday for two points and handed Central Gauteng a 7-5 hiding in round two. With the scores level after the foursomes, skipper Josef Fourie led the impressive five-three singles rally when he dismissed the country’s number 10 ranked amateur, Yubin Jung, 4 & 3.

While Fourie admits that he prefers to lead by example, he acknowledged the young players, saying that they really are stepping up to the plate.

“We have five new guys on the squad and they have been seriously impressive. We’ve had two solid days and I’m going to trust them to keep the fairy tale going.”

Although Western Province may still trail Kwazulu Natal and Free State by two points, the dynamics of the South African Inter-Provincial tournament has changed after the defending champions staged a spirited comeback.

Province rebounded, from a seven point drubbing by Kwazulu Natal, with vigour in their match against Gauteng North to narrow the gap on the two unexpected frontrunners.

Although they drew four all in the afternoon singles, a 2 ½ to 1 ½ win in the morning foursomes saw the Cape side edge out Gauteng North for day two honours.

“We definitely combined better this morning,” said manager Henk Smith. “Gregg (Upton) and Robbie (Oosthuizen) were unlucky to lose, but that’s golf. And, although we lost the first three singles, Aaron (Russell) had a great 6 & 5 win over Rae Mackie and that just got the rest of the boys fired up.”

Joint leader Eastern Province kept their position in the B-Section log alive with a 7 ½ to 4 ½ win over Mpumalanga, while North West also stayed on track with the same winning margin over Border for six points.

For a second day running, Luke Jerling was the stand-out man for Eastern Province with a 4 & 2 win over Niel Clifford the singles and a 3 & 2 partnership with Mark Lloyd in the foursomes.

Ekurhuleni earned two points to join the three-way tie at the top after a 7 points to 5 win over Southern Cape and trouncing Limpopo by 8 points to 4.