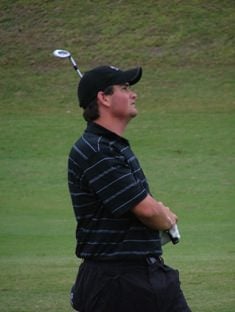 There’s little doubt that the match between Kwazulu-Natal and Free State & Northern Cape on Thursday is the most eagerly anticipated clash of the 49th SA Inter-Provincial Tournament at Durban Country Club.

Standing shoulder to shoulder with six points from three successive wins each, the stage is set for an intense battle between the only two unbeaten teams in the A Section.

Natal began their quest for a seventh national title by drumming home a 9 ½ point win over defending champions Boland on Monday, but struggled in the wet conditions on Tuesday to edge out Boland by half a point.

The local favourites laid a solid foundation with a 3-0 lead in the morning foursomes on Wednesday, though, and secured a first-rate 7 ½ – 4 ½ win over Gauteng North to solidify their position at the top of the log.

“It was a lot tighter than the scoreboard suggests,” said team manager, Ivan Curlewis. “We struggled in the conditions and there were times when Gauteng North looked to take the lead, but our guys hung tough and came through.

“We face Free State now, who are also undefeated and, if the conditions prevail, it will be a very, very tough contest.”

The unheralded Free State & Northern Cape team, who won just one match last year, came out firing against Boland for a 7-5 win in the first round and replicated that performance against Central Gauteng on Tuesday.

In the third round, skipper Josef Fourie led his side in what he termed ‘a little grudge match’ against Western Province. Free State held a 4-0 advantage after the morning foursomes turned up the heat in the afternoon singles to beat the defending champions 8 ½ – 3 ½.

“Last year we lost all our singles matches against Western Province, so I won’t deny that we had a little revenge on the mind,” said Fourie laughingly. “To be honest though, it was a tough day at the office, even if the scores tell a different story.

“We combined well, though, and the young guys especially pulled through to win this one for us. I just hope the fairy tale continues.”

Trevor Mahoney sunk a 25-footer for eagle at the 18th that sealed a 1-up result against Yubin Jung and a 7-5 win for Boland over Central Gauteng, which earned the 2008 runners-up their first points in the competition.

“It was a clutch putt, but I knew it was going to drop the minute I made the putt,” said a delighted Mahoney.