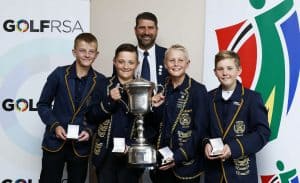 The Kempton Park-based team opened up a three shot lead with an opening round of 240 and clinched a two shot victory on a winning total of 477 with a final round 237.

“La-Velle Clark-Halket carded 77 and Corne Jansen and Marno Lange both posted rounds of 80 to secured the victory for us,” said Laerskool Kruinsig team manager Jurian Pienaar.

“We finished sixth in last year’s event at Randpark and it was very good experience for Corne, Marno and Ian van Rhyn, who led the team in the first round. La-Velle joined us this year and really punched well above his weight for the team.

“I am blown away by this team’s performance. Links golf is never easy, especially given the wet conditions on day one and the wind in the final round. But the boys got a great feel for the course during the practice round when the wind was really howling and it definitely helped their game plans.

“I was hoping for a top three finish this year, but these lads had their own agenda. They never backed down from the challenge and they really played for each other. We took a three shot lead in round one, but with this format things can change quickly. I asked them to bring their A-game and to try to limit the mistakes and they delivered.

“We wore pink ribbons this week for Amone Steyn, a learner at Laerskool Kruinsig who was recently diagnosed with leukaemia and we would like to dedicate this victory to her. We are also really happy to take this trophy home as a belated birthday present for our headmaster Johan Kruger, who gives us such incredible support.

“On behalf of the team, I would like to congratulate Curro Hazeldean on a fantastic final round battle. They gave us a run for our money and it was a very exciting tussle right to the last putt. Well done to all the primary schools who participated this year and their contribution to the success of the eighth Ernie Els SA Primary School Championships.

“Competition is the only way for these young juniors to grow and develop and we thank GolfRSA and David Younge for a fantastic event.”

The Curro Hazeldean Primary scholar carded rounds of 69 and 70 to win by 16 shots from Leonard Bevan from Laerskool Buhrmannsdrif and Laerskool Saamtrek’s Heinrich Janse van Vuuren. Lange and Clark-Halket from Laerskool Kruinsig shared fourth on 159.