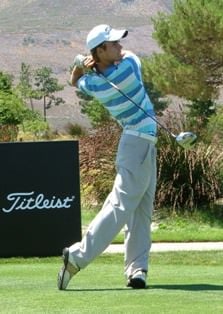 Harare (Zimbabwe) (11 April) – Leon Knoll leads by one shot after the conclusion of today’s second round of the 2009 Zimbabwe Amateur Golf Championship being played at Royal Harare Golf Club in the capital city. The championship will be decided over 72 holes of stroke play.

The 19 year old Gauteng North player recorded a round 70, two under par, combined with his pace setting first round of 69, gave him a 36 hole total of 139, five under par. Knoll heads up a leader board that is dominated by South Africans, seven players in the top nine places.

With the prestigious Zone VI team competition commencing in Harare next week, the South African Golf Association has sent its full team of eight players to participate in the Zimbabwe Amateur in preparation for Southern Africa’s leading amateur golf team competition.

Current South African Amateur Stroke Play champion, 18 year old JG Claassen recorded the best round today, a four under par 68, which moved him into second place with a 36 hole total of 140, four under par.

Claassen’s second round was one shot off the amateur player course record held by South African Henk Alberts, which he set in 1998. Claassen is still some way off Nick Price’s 63 also set in November 1998.

Other South Africans at the top of the leader board include Coenie Bester (143), Derik Ferreira (144) and Johan Bekker (146).

All players making the cut will contest the last two rounds both of which will be played tomorrow (36 holes).