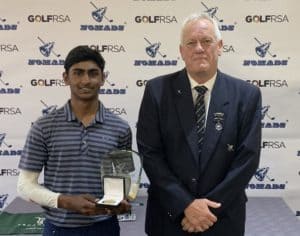 30 August 2019 – KwaZulu-Natal junior Kyle Kistensamy celebrated his first national success when he scored a runaway victory in the Nomads North and South Junior Championship at Pecanwood Golf and Country Club on Friday.

The 17-year-old Prince’s Grant golfer had set himself the target of winning on the national circuit this season, and he duly delivered on the final day.

After a bogey start in the final round, he dropped two more shots on the third, but Kistensamy turned things around with seven birdies and an eagle on the par five 12th for a sizzling 66 to close out a six-shot victory on six-under 210.

“I really had to dig deep after that start, but I pulled it back and went on the attack. It’s really cool to land the big one in the final Nomads event of the season. Now I can go back to the books, knowing I got the job done.”

Kistensamy has been trending towards a big win throughout the season.

He won two club championships – first at Umhlali Country Club and then at his home course – and racked up a handful of top five finishes on the local provincial circuit.

He landed a share of the first round lead with an opening 69 at Pecanwood headed into the final round just one off the pace from 36-hole leader Justin Bester from Ekurhuleni after carding 75 in the second round.

“I wasn’t too fazed after the bogey start, but I knew I had to stay off the bogey train if I wanted to get back into the fight after the double on three,” said Kistensamy.

“I hit 2-iron off the tee at the fourth and a full sand-wedge into the green, and holed a three-foot putt for birdie to get one shot back. After birdie at the par five (seventh hole), I chipped in for another birdie at eight to get back to level for the round.”

Kistensamy went on the rampage after the turn.

The KwaZulu-Natal junior sealed victory with a birdie-par finish.

“On 17, I hit my tee shot left of the green and chipped in again for birdie. I wasn’t under any pressure, because I had six shots in hand playing the last, so I just played the last hole conservatively to make sure of the win,” he said.

“The timing is perfect, really. My goal this season was to win one of the Nomads titles and now, with the final exams coming up, the pressure is off. I’m hoping for a good matric result, because I want to study a B.Com degree.

“I’m looking at some colleges in the United States, but I might just stay at home and study through Varsity College. Either way, I’ll be playing a lot of golf so I can keep on improving my game.”

Samual Mackenzie from Royal Johannesburg and Kensington also made a stuttering start with three bogeys and a double bogey in his first six holes, but the Gauteng junior rallied with five birdies on the back nine for a final round 70 to take second on his own on level par.

Local favourite Luc Gavagnin sealed third place on one-over with rounds of 71, 75 and 71.