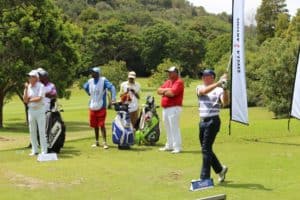 James Kingston will start the final round of the 2019 SA Senior Open with a commanding eight shot lead at Plettenberg Bay Country Club; credit Accelerate Sport.

24 October 2019 – James Kingston continued his love affair with Plettenberg Bay Country Club on moving day to open up a commanding lead as he targets his first victory in the SA Senior Open, hosted by Bitou Municipality.

In a career spanning 31 years, Kingston’s trophy case in Potchefstroom is packed with silverware from 18 victories worldwide, but he is relishing the chance to bag his first trophy in the senior ranks in the Sunshine Senior Tour’s flagship event.

The 53-year-old returned an even-par 72 that featured four birdies and bogeys apiece. With strong wind forecast for the final round, the eight-shot cushion on six-under over two-time former champion Mark McNulty could prove valuable.

“Obviously it is nice to have a bit of a lead, but that’s not something I’ll be consciously thinking about,” said Kingston. “I will approach the final round the same way I’ve played every other round. I won’t change me game plan or play less aggressively. I will just keep doing what I’ve been doing.”

Only three players managed to post sub-par rounds on Thursday but Kingston was not surprised.

“We had a lot of wind over the first two days, and the greens have firmed up quite a bit and with a lot of tough pin positions, it was difficult to get close enough to the flags to score,” said Kingston. “The scores today certainly reflect the conditions.”

Plettenberg Bay and the host course holds fond memories for Kingston and the former SA Open champion looks forward to creating another special moment in this corner of the Southern Cape on Friday.

“We used to come down here on holiday all the time when I was a laaitie and I just love Plett. I know lots of people here and I really love this course. It’s is one of South Africa’s hidden gems. To win my first SA Senior Open title here will definitely be special,” he said.

McNulty, 66, did well to keep pace with Kingston over the first nine holes, but his crusade took a major hit with a double bogey six on the 12th, followed by a triple bogey on the short 13th. He signed for a 76 to retain second place on two-over.

Reigning Sunshine Senior Tour Order of Merit leader Kevin Stone has been the picture of consistency and moved to third on three-over with three successive rounds of 73.