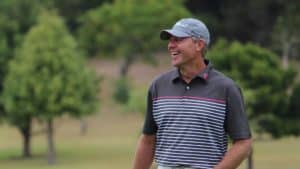 23 October 2019 – James Kingston is on course for an elusive national double after taking a commanding lead in the second round of the prestigious SA Senior Open hosted by Bitou Municipality on Wednesday.

The 2007 South African Open champion fired three birdies on the bounce over the last three holes at Plettenberg Bay Country Club for a six-under-par 66 that moved him four shots clear on six-under.

He was four off the pace at the start of the second day after an opening even-par 72 and rallied after a bogey start with four birdies to take the lead through the turn. The 53-year-old Potchefstroom golfer held on to pole position with a blistering finish.

“The key was to get going today and shoot a decent round to get into contention,” said Kingston.

“It was one of those days where I really hit the ball unbelievably well, but I still missed three birdie chances inside of four foot to shoot six-under. I’m happy with six-under, but it’s also disappointing, because it could have been one or two better.” 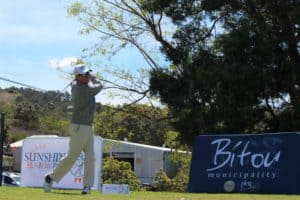 Two-time former champion Mark McNulty also produced some vintage golf in the Sunshine Senior Tour’s flagship event with a two-under-par 70 round and will start the final round in second on two-under.

First round pacesetter AP Botes carded 75, which dropped him to third on one-under, while Mike Quinn registered a 73 to finish in fourth on level par.

Only five golfers managed to break par on another windy day in the Southern Cape.

Chris Williams, Steve van Vuuren and Rocky Tlhabanyane all returned rounds of 71, with Tlhabanyane moving into a share of fifth on one-over alongside Kevin Stone and Roger Wessels, while Williams and Van Vuuren tied for 11th on six-over.