After her spectacular double at the Sanlam SA Amateur last week, Kim Williams continued her run of victories when she claimed the Proshop Gauteng Amateur Championship title played at the 72-par Country Club, Woodmead course yesterday.

Kim returned scores of one-under-par 71 and three-over 75 to finish on 146, two strokes ahead of Swaziland’s Nobuhle Dlamini(72, 76) who made a welcome return to SA tournaments last week. Also on 148 was 15-year old Lara Weinstein who gave the leaders a run for their money in the final round of the SA Amateur last Tuesday. She carded 74, 74 at Country Club for her 148.

Kim played steady golf on a day that started off in light rain, but cleared later to glorious sunny conditions. The course was lengthened by 400m to play at 5807m and the greens double cut to 10.5 on the stip meter. Kim commented that these were the best greens she had played on this year.

The 10 to 18 Handicap Division was won my Namibian Letitia Brink who also won that Stroke Play Division at the SA Amateur last week. Runner-up was compatriot Maryka Short, the Match Play winner at the same event. 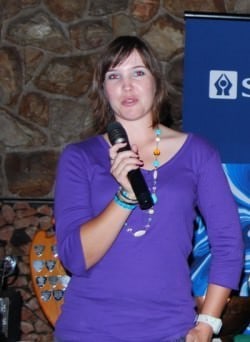