The North Women’s Open Championship played at Rustenburg Golf Club on Sunday 1 March 2009, was won by Gauteng North Protea golfer Kim Williams on a 72 hole total of 142, four strokes ahead of her nearest rival, Elru Botha of North West on 146. Elru picked up the the closed championship trophy. Henriëtte Frylinck (Gauteng North) and Alana van Greuning (Mpumalanga) were a stroke back on 147, one shot ahead of Connie Chen (Gauteng North) and Gauteng’s Nicole Carlse on 148.

The day dawned with sunny skies so the tournament was underway. Unfortunately the course was very wet with a fair amount of casual water. However, the water didn’t seem to be any problems for some of the players in the morning round as Kim Williams shot 2 under par and Elru Botha and Junior Lara Weinstein both had level rounds.

The afternoon round saw Kim Williams and Namibian Bonita Bredenhann score par rounds. As the course started to dry out some super golf was played by the players and a great day was had by all participants. 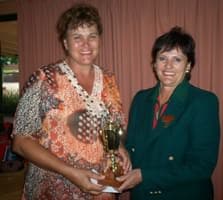 The 10 – 18 Division was won by stalwart Hentie Clack, Ansa van der Merwe headed the 19 – 24 handicap division and Marelize Church won the stableford competition for the 25 – 26 handicaps.