8th January 2010 – we arrived at OR Tambo International very excited and looking forward to a new experience as Iliska and I had not been to Mexico before. At the check in counter we were informed that the flight was full (not one single seat open) and we would not be sitting next to each other, which was still ok until we saw our seat numbers and we had been placed in the middle isle in the middle seat about six rows from each other.

9th January 2010 – After a 16 hour flight to Atlanta and then another 3½ hour flight to Mexico City we had finally arrived. We were very excited and extremely exhausted. After a short passport control queue we were off to claim our baggage. We were happy to see our golf clubs come out and joked to each other that at least we would be able to play if our other bags didn’t arrive. Murphy’s Law – our clothes luggage did not arrive. We stood in the baggage enquiry line for a good hour before speaking to Salvador (a very handsome Mexican) who could speak English luckily. I was told that Iliska’s luggage was on the next flight to Mexico and my bag was sitting at Atlanta’s Airport. I told Salvador in my most graceful tone that we were desperate to get our luggage as we were due to start playing a tournament in two days time and he obliged and assured me that our luggage was on a high prioritory list and we would get our luggage ASAP.

We continued through customs and luckily we were not stopped for checking, we were however over an hour late for our transport to the golf course. As a result of us being late we had to wait a further two hours for Denmark to arrive so that they could drive to the golf course with us. As you can imagine Iliska and I were not impressed by this stage. Eventually we headed off to the golf course (another surprise) which was two hours drive through peak traffic.

As we arrived at the golf course things started looking up, what an amazing sight out of the city which is absolute chaos, this was something to keep your eyes open for. We were very warmly greeted and introduced to the Mexican Committee and our hosts for the duration of our stay.

It was by now quite late in the afternoon and we were dying to shower and jump into bed which is exactly what we were offered when we got to our hosts house. 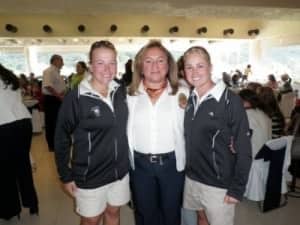 10th January 2010 – Our luggage had not yet arrived so our hostess, Patty, had lent us pants and a shirt for the day to play our practice round in. The weather was awful in the morning with very bad fog and didn’t look like it was going anywhere quickly. With the altitude in excess of about 8000 feet above sea level the fog took a while to burn off.

We did however eventually tee off with limited visibility but only for the first two holes then we could see where we were supposed to be hitting the ball. We managed to get to the 16th hole before Iliska and I had to return to the club house for a press conference. The press conference was unexpected and made us feel like celebrities playing in the US Open after a win. Although everything was in Spanish we did get asked a few questions which were translated for us.

After the press conference we returned to the golf course to finish our last two holes. We then had to change back into our formals for the opening ceremony. The opening ceremony was really something to see, they had a band that played the national anthem with their highest form of military coming in for the anthem and then marching out.

After the ceremony we ate supper, which was most of the time a buffet with mostly normal (No Chilies). We then headed off home and jumped straight into bed again. 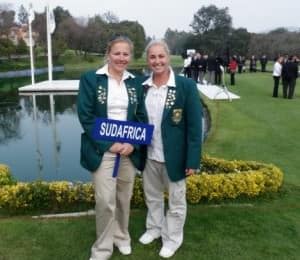 We slept on average about 12 hours a night except the last night when we had a function from which we could not leave early.

11 January 2010 – Round One and very excited although still no luggage. We played in our formal slacks and luckily Patty (our hostess) lent us shirts again. Off to the golf course where we managed to have a good breakfast and head off to the driving range. I still tend to be a bit nervous during the first day of an international tournament, but a few pars under the belt and it becomes like any other tournament. I shot a 74 in 4th position and Iliska shot 81.

Our luggage finally arrived just after 10pm and we were ecstatic.

12 January 2010 – Round Two and we were very excited to be playing in our own golf clothing. The weather still overcast and quite cold with an icy breeze. I shot 73 with a good come back on the 2nd nine as I had made a triple bogey on the 9th to turn 3 over and tied 2nd. Iliska was struggling to get off the tee and carded a 84.

We were called off when I was on the 8th green and Iliska on the 11th fairway due to dangerous circumstances. We were quite confused as there was no lightning or even rain to talk of. The officials came racing on to the course in golf carts to come and fetch us and as far as I could make out there was some narcotics problem. Very confused we headed back to the club house, on my way I saw a police helicopter on one of the properties on the 9th fairway with armed police men running around the house. We were later told that the police had received a tip off that there were drugs in the house. After an hour in the club house we were told we could resume with our rounds. Not frightening at all…

13 January 2010 – Round Three started with the weather the best it had been all week, very excited to get going. I had started well and was looking good for an under par round but with a wobble at the end I bogeyed the last two holes to end on a 73 again and now in second alone two shots behind the leader and two shots ahead of third place. Iliska struggled again and was just having a terrible time on the golf course with slow play and rulings all the time in her four ball, she carded a 91. Columbia had won the team event and we ended a disappointing seventh.

14th January 2010 – Round Four was one of the most up and down rounds I have yet played. Things started terribly for me with drops on the 1st, 2nd, 5th and the 6th with a birdie on the 8th to turn three over and six shots behind the leader. The back nine was more or less the same but the young Mexican who was leading made a quadruple bogey on the 15th as her father (also her caddy) got her a two shot penalty for moving an immovable obstruction.

I had now found myself tied for the lead with three holes to play. We both dropped the 16th and pared the 17th. I had hit a huge drive on the 400 yard par four 18th. I missed the green with a mere gap wedge in my hand but chipped it to 5 five foot. A little down holler, right to left, I thought I had nailed it, until my ball came rolling back towards me after it had horse shoe. The 13 year old Mexican had a three foot putt to seal the deal and she made no mistake. Iliska came back nicely to card her best round of the tournament with a 82.

The press throughout the tournament were unbelievable from newspapers and magazines to television broadcasts. I had been interviewed everyday since the end of the second round and was taken aback by their interest, although they were all routing for Mexico to win the tournament.

Prize giving once again was an awesome experience with the Executives giving us a taste of their most famous drink TEQUILLA.

We enjoyed a social at an executive’s house with Denmark and Columbia and a few Latino boys (a bit young for Iliska and I).

15 January 2010 – time to come home. We woke up at 5am that morning to be picked up at 6am to leave for the airport (once again in traffic, so a good two hour trip). Arriving at the airport at 8am we were hopelessly early and couldn’t check in so we dragged our baggage to the food court and had a good breakfast. Eventually at 10am we were able to check our luggage in and go through security. Another two hour wait on the other side of security we took a slow walk around the terminal (not a big terminal at all, something like Johannesburg International (OR Thambo) domestic terminal). We boarded to Atlanta and arrived at 5pm, Iliska and I said our goodbyes as she stayed behind for University. I made it through all the security with no problems luckily and we took off at about 6pm. After a good 16 hours back to Johannesburg I finally landed on the 16th at 5:30pm.

I would like to thank Women’s Golf South Africa for giving me the opportunity to play in Mexico, I really enjoyed the experience and hope I held the country’s flag high.