Kim picks up the double at Nomads Boland Championships

A field of 84 Players, including 42 in the nine and under championship division and 32 juniors, teed off in inclement weather on Monday 12 October to contest the Nomads Boland Stroke Play Championships.

Top ranked Kim Williams claimed the double and now moves on to Cape Town when she and most of SA’s tournament players compete in the Gus Ackerman Trophy at Mowbray this weekend.

In the strokeplay event which was reduced to 27 holes due to inclement weather, Kim carded 106, three strokes ahead of KZN’s Johmari Logtenberg on 109 and Lumien Orton (Free State) on 110. On Wednesday she claimed the match play title with a 4/3 victory over Lumien Orton.

Charmaine Fagyas reports, “The course was flooded, rivers ran where there were no rivers. Play was meant to start at 07h00 and after much consultation with the course staff and rules officials and checking on the any damage to the course, it was agreed to start at 08h30 and to play 27 holes only.

“The bunkers were taken out of play as they were all flooded. The players had to be transported from the first green to the second tee in golf carts as the dams overflowed. The rest of day was played in mostly rainy weather though the sun came out at times. None of the players complained and we managed to get in the 27 holes in good time.”

Boland juniors did exceptionally well in the B and C divisions

The match play championship took place in perfect spring weather. During the initial rounds, the golf was good and most of the games were very closely contested, some matches finishing on the 19th and 20th holes.

In the semi-finals on Wednesday, Kim Williams and Lumien Orton had wins over Bertine Strauss and Nicole Bekker, and Kim claimed the championship with a 3/4 victory over Lumien.

Alana van Greuning of Mpumalanga won the Flight with a victory over WP’s Nuraan Mallick, Tallie de Wet picked up the 10 – 18 handicap championship with a win over Olivia le Roux and young Cassisy Williams beat Vivienne Floris for the C Division Championship. 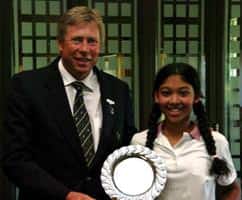 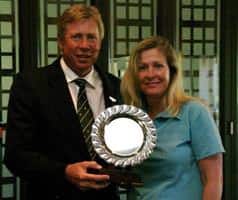