The park-like George Golf Club hosted most of the country’s top golfers when the Southern Cape Championship was played there yesterday. The WGSA squad for WATC, who had attended their second training camp at the Kenako HP Centre, were joined by women golfers from all parts of the country to turn this championship into one of the most high-profile of the year.

Kim Williams, currently ranked two on the WGSA Ranking, returned a great two-under 70, having been two back on 74 after the morning round. She won the event by one stroke from Plettenberg Bay’s Ashleigh Holmes on 145. Vanessa Smith (Rondebosch), Lumien Orton (Schoeman Park) and Bertine Strauss (Rustenburg) all returned level par 72s in the first round, but could not match Kim as she stormed back to win the event with her sub-par round. Former pro, Vanessa Smith tied in third position with Henriette Frylinck who carded a one-under par 71 on the final round. 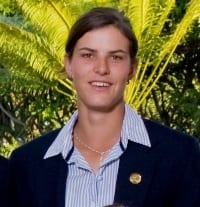