Kim climbs up the leadboard in Turkey

Kim Williams played solid golf in the third round of the Turkish Open Amateur Championships being played at Antlaya, Belek this week and her 74 moved her up to fifth on the leaderboard. She had carded 75 and 79 in the first two rounds.

Erica Lefson reports, “Kim still had a few shots from the trees that ended in drop shots – and as she is capable of going under par she was frustrated with her dropped shots. She scored a good solid 74 and climbed up the leaderboard to now be tied in 5th position. I will be her caddy tomorrow.

“The girls teed off first today and it makes a big difference not having to play in the midday heat. Ashleigh is enjoying her game – but she had a few lose shots that ended up in drop shots. I enjoyed walking the last nine with her – she finished with a 79, haveing scored 76 and 81 in rounds one and two. 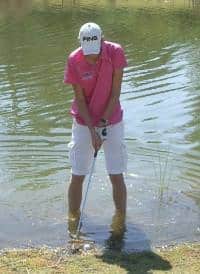 “The picture of Ash playing out of the water was on the 15th. It is a good thing I was her caddy as I was sure I saw the ball bounce to the edge – she said it was in and as about to take a drop – I ran ahead and yes her ball was on the edge – she played it out in good Pardraig H style.”

Yvette du Plessis carded 83 in the third round.