Kim aims for the double at Sanlam SA Amateur

Sanlam SA Stroke Play Champion Kim Williams hopes to pull off the double tomorrow when she tees off at 7.30 am in the 36 hole final of the SA Match Play Championship.

Kim defeated last year’s finalist Lumien Orton at the 15th this morning and then went on meet Tanica van As, now playing for KZN. Tanica has played a good championship, defeating Nicole Becker in the first round followed by a 3/2 victory over 15 year old Lara Weinstein. Tanica continued her winning streak when she to beat the in-form Connie Chen this morning at the 19th but lost to Kim Williams this afternoon 5/4.

Kim’s opponent tomorrow is 17-year old Namibian Bonita Bredenhann – a fearless player – and this should make for a very exciting encounter. Bonita and Kim play very different games – both are on top form and the result is fairly unpredictable. Johmari Logtenberg had a 3/1 win over Marne Roos in the quarter-final but succumbed to Bonita at the 16th in the semi-final this afternoon. 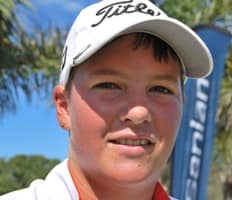 The Plate event is a new innovation this year and Bertine Strauss takes on Nicole Garcia in the final tomorrow. Bertine lost to Lara Weinstein in the first round while Nicole was knocked out by Eugenie Clack.