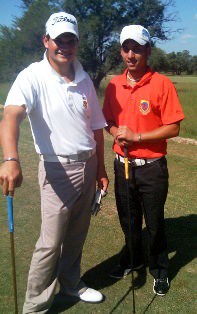 One of the three teams, namely Kenya, Zimbabwe or South Africa, at the top of the log, at the end of yesterday’s third and penultimate round, in the Zone VI Team competition, needed to win all eight games in today’s final round in order to win this annual competition. And this is exactly what Kenya did.

They were the only team to do so and in so doing took their final points position to 21, one and a half point clear of South Africa.

The competition was played at the Gaborone Golf Club, Botswana.

South Africa won seven matches, with the eighth, between Jared Harvey, the South African team captain, and Stefan Anderson, of Kenya, going the way of the Kenyan by 3 and 2.

Zimbabwe had a disappointing final round winning only two and a half points and in so doing dropping out of contention. In fact Namibia played strongly, winning 6½ points and moved up one place to finish third.

“This is the first time South Africa have lost since 2000,” said Enver Hassen, South African Golf Association president and team manager. “We are obviously disappointed but Kenya were clearly the better team this week winning all their crucial games, well done to them.”

Most of the South African players won their matches fairly comfortably. “Tyrone Ryan did really well in seeing off Schalk van der Merwe of Namibia,” said Hassen. Van der Merwe played the Sunshine Tour of a number of years and recently reapplied for amateur status.

Jared Harvey was disappointed to lose his match. He did manage to get himself up by 1 on hole six, however the next hole he lost to his Kenyan opponent. Anderson controlled the game from there, he was three up after hole fourteen. That is how it remained till he closed out the South African on the sixteenth hole.

In all twelve African countries participated, making this one of the biggest Zone VI tournaments for some time.

Fourth and Final round results of the South African Team:

After all teams have played twenty four matches