The second event had all the elements of the inaugural edition two years ago – passion, sportsmanship and superb shot-making – but unlike 2019, where the winner that week was decided well before the 18th green, this year’s championship had a thrilling finish.

Coming down the stretch on Saturday, there were as many as nine who had the chance to win, but it was Kajitani  that claimed the spoils.

The 17-year-old shot an even-par 72 and defeated Emilia Migliaccio on the first hole of a sudden-death playoff with a spectacular two-putt on the 18th green, followed by a subdued fist-pump.

The first player from Japan to win at Augusta National, Kajitani shot 73-72-72 for a one-over-par 217 total.

“I can’t really imagine the reception I will receive when I’m back to Japan, but hopefully everybody is happy and will enjoy, and I’m looking forward to going back to Japan,” Kajitani said.

Kajitani, ranked No. 26 in the World Amateur Golf Ranking (WAGR), entered the final round tied for fifth place.

While others were jockeying for position and going through ups and downs, she remained steady and continued to quietly navigate her round. After an early bogey on the par-3 fourth hole, Kajitani rebounded with birdies on the eighth, 14th and 15th holes.

She ran into trouble with a double bogey on the par-4 17th but her caddie told her to shake it off and focus for only one more hole. Which she did, making a solid par to tie Migliaccio for the clubhouse lead.

The duo then sat back to watch the final three groups finish.

The playoff returned to the 18th hole and Migliaccio hit her second shot right of the right-greenside bunker. Her third found the bunker and she was not able to get up and down, finishing with a bogey 5.

“To be honest, when I came to the States, I didn’t expect that I’m going to win the tournament,” Kajitani said. “And then day-by-day I have been confident and then I won the tournament.” 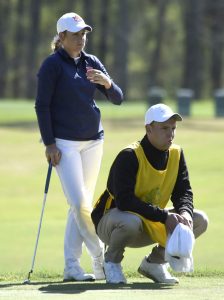 In her first appearance in the invitation-only event, Telfer finished 12th. The Bryanston golfer once again made the top 30 cut after the first two rounds, but she battled in the tough windy conditions throughout the tournament and carded rounds of 74. 76 and 76 to tie for 22nd on 10-over.